Blu-Ray Review: THE MAN FROM EARTH 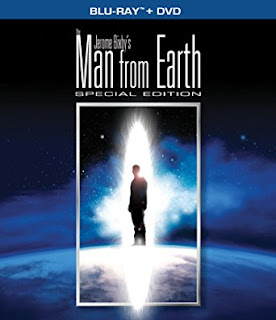 Time for a bit of honesty here. I'm pretty knowledgeable about movies in general, more so of certain genres which interest me the most. However, until I received this Blu-Ray to review, I had never even heard of The Man from Earth.

Apparently, however, this ten-year-old film is held in high regard by some, has won numerous awards and was touted as the last thing written by Jerome Bixby (who allegedly finished the script on his deathbed in 1998). The write-up and interviews included with the disc would have you believe Bixby was the second coming of Isaac Asimov, but aside from a few well-regarded Twilight Zone & Star Trek episodes, I'd wager few reading this are all that familiar with his name.

So, is The Man from Earth a rediscovered classic by an underappreciated visionary? Not really, but for a microbudget sci-fi film that takes place in a single room and consists entirely of dialogue, it's sometimes quite interesting.

David Lee Smith plays John Oldman, a respected and admired college professor who's about move on with his life, with no particular destination in-mind. A few of his friends & colleagues gather to see him off, at which time he claims he's actually over 14,000 years old, born during the Cro-Magnon era. At first, they think he's joking around, but before long his utter sincerity and attention to historical detail has them thinking maybe he's lost his marbles. Still, their attempts to poke holes in his story spark some occasionally heated discussions on the possibility that he's telling the truth.

The dialogue is the whole story, which eventually raises a few intriguing questions about commonly-held beliefs (including foundations of faith and religion). Some of it descends into philosophical goobledegook and silly revelations, testing the viewer's patience a bit. And even at 87 minutes, the film drags on longer than it should. However, everything does culminate in a pretty nifty twist ending.

Though it might have been more effective if Bixby had originally written this as a Twilight Zone episode, The Man from Earth's unique premise renders it fairly engaging. It's intelligent and well-performed by a cast semi-recognizable character actors (many of whom, coincidentally, also have Star Trek connections).

It also needs to be said that the video transfer betrays the film's ultra-low budget (which was originally shot with camcorders). Sometimes it's pretty distracting, and the night scenes in particular are really drab and grainy.