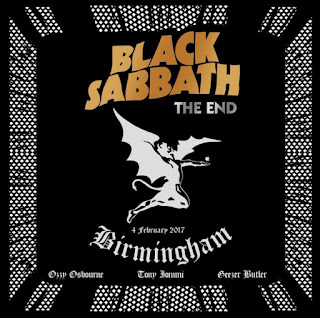 Here's hoping this truly is the end for Sabbath.

Not because I don't love them. After all, every self-respecting metal fan has regularly bowed at the alter of Sabbath for decades. And if you know anyone who proclaims a distaste for such classics as "War Pigs" and "Paranoid," you need to pick better friends.

But Sabbath has truly done it all. They've climbed to the very top of the metal mountain they themselves had forged, tumbled from it more than once, lain dormant like Mt. St. Helens, then came roaring back with one last killer album that showed Tony Iommi is still a riff-master, Geezer Butler is a consummate bassist and Ozzy Osbourne is still...well, Ozzy Osbourne. They're now metal's elder statesmen and have nothing left to prove. Why not go out in a blaze of glory in your own hometown, where it all started nearly 50 years ago?

The End captures their final epic concert, held in Birmingham before an enthusiastic, sold-out crowd. The moment the curtain dropped to the opening strains of their titular tune, "Black Sabbath," I had goosebumps and could only imagine what it was like to have been there. But this video is the next best thing, beautifully shot and and sonically stunning.

These guys were never renowned for strutting and prowling the stage (Iommi & Butler barely move from their designated spots), content to simply play the songs with their usual virtuosity while Ozzy's charisma keeps the crowd pumped (even if they have no idea what he's saying). But director Dick Carruthers keeps things visually interesting with surefire editing, alternating between up-close-and-personal shots of the band and the visually-impressive, pyro-enhanced stage presentation.

And it's hard to argue with the song selection. All their biggest hits are featured, impeccably performed by a band who hasn't lost a single step after all these years. I suppose one quip would be the lack of any songs from their final album,13, which had some great tunes that would have fit-in comfortably with the classics. Also included is "The Angelic Sessions," A five-track CD containing re-recordings of classic-era songs, none of which are part of the live set. They don't improve on the originals, but these are Black Sabbath's final studio recordings, so its inclusion is fitting.

The End is an aptly-titled, perfect coda to a legendary career. For Sabbath to continue beyond this point would be an exercise in redundancy. That sense of finality comes through in their performance. Each time they look at the crowd - or more significantly, each other - it's almost as if they're saying, "This is it guys...let's make it a good one." 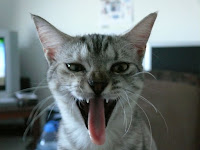 MEE-OW! LIKE BITING THE HEAD OFF A PIGEON
Posted by D.M. Anderson at 8:28 PM