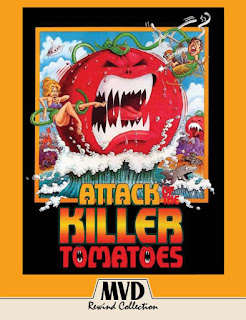 UFOs! Bigfoot! Communists! The government has swiftly dealt with many a crisis... But can it survive the diabolical ATTACK OF THE KILLER TOMATOES?

Just when you thought it was safe to go back in the supermarket, you're face to face with terror so bold, so frightening it has never been seen on-screen before or since (not until the sequel, anyway).

After a series of bizarre and increasingly horrific attacks from pulpy, red, seeded fruit, Mason Dixon (David Miller) finds himself leading a "crack" team of specialists to save the planet. But will they be quick enough to save everyone? To save you?

You can't run! You can't swim! There's nowhere to hide!

The killer tomatoes are everywhere!
SPECIAL FEATURES
-        "Legacy of a Legend" (14:13, SD) is a collection of interviews, including comments from John DeBello, Costa Dillon, film critic Kevin Thomas, fans Kevin Sharp and Bruce Vilanch, future Tomatoes mainstay John Astin and actors Steve Peace, Jack Riley, and D.J. Sullivan
-        "Crash and Burn" (3:40, SD) is a discussion about the famous helicopter crash that could have killed everyone because the pilot was late on his cue
-        "Famous Foul" (2:21, SD) is about the San Diego Chicken and his role in the climatic tomato stomping ending
-        "Killer Tomatomania" (4:33, SD) is a smattering of interviews with random people on the streets of Hollywood about the movie
-        "Where Are They Now?" (2:51, SD) fills viewers in on what the cast and crew have been up to over the past couple of decades
-        "We Told You So!" (3:07, SD) takes a hard-hitting look at the conspiracy of silence surrounding the real-life horror of killer tomatoes
Posted by D.M. Anderson at 8:07 AM