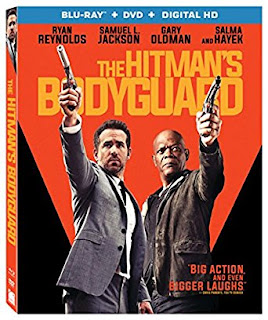 For the longest time, I couldn't stand Ryan Reynolds. There was something about his  performances that just rubbed me the wrong way...a juvenile, smug, frat-boyish quality he brought to his roles that almost always sucked me right out of the movie. However, he was terrific in the underappreciated black comedy, The Voices, the first time I thought he was truly convincing. And of course there's Deadpool. Really, it's hard to imagine anyone else as the title character.

Maybe I'm just getting used to him, or maybe he's more versatile than I first first gave him credit for, because not only did I enjoy him in The Hitman's Bodyguard, he's the best part of the movie. No small feat when your co-star is Samuel L. Jackson. Then again, Jackson doesn't exactly spread his wings, playing yet-another expletive-spouting badass (though he's still amusing). Reynolds is mostly the uptight straight-man to Jackson's more cavalier antics, but his often-deadpan performance when reacting to the surrounding mayhem is pretty damn funny.

The plot itself is strictly by-the-book. Down-on-his-luck professional bodyguard Michael Bryce (Reynolds) is coursed by his former girlfriend, Interpol agent Amelia Roussel (Elodie Yung), into escorting notorious killer-for-hire Darius Kincaid (Jackson) to testify at the International Criminal Court in The Netherlands. Kincaid is the only living witness to atrocities committed by tyrannical Belarian president Vladdislav Dukhovich (Gary Oldman, who doesn't really stretch himself either). Duknovich stops at nothing trying to keep Bryce & Kincaid from reaching the courthouse alive.

The Hitman's Bodyguard could have been a straightforward - and generic - thriller, but goes the still-pretty-generic buddy-comedy route: Bryce & Kincaid first want to kill each other, but are forced to work together in order to survive before finally developing mutual fondness and respect. Still, the formula more-or-less works, mostly thanks to the two leads, who play off each other well. On the other hand, Salma Hayek as Kincaid's fiery, foul-mouthed wife is sort-of wasted. She's easy on the eyes as always, but her character is strictly a plot device who, aside from a few flashbacks, doesn't share any scenes with the rest of the cast.

Strewn throughout the plot is a lot of gunplay, destruction and a surprising amount of bloody violence. These segments are well-executed, even played for laughs on occasion (there are moments that approach black comedy), though, like the story, no one's exactly reinventing the wheel here. Still, the two leads' chemistry together ultimately makes The Hitman's Bodyguard worth checking out. They're obviously having a lot of fun and fans of this sort of thing likely will, too, even if they've seen it all before.