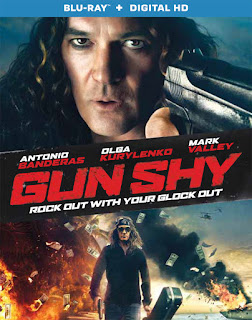 Turk Henry (Antonio Banderas) is an aging, reclusive, has-been rock star who's content to sit in his mansion watching TV and drinking all day. But at the behest of his wife, Sheila (Olga Kurylenko), the two go down to Chile for a vacation. Still, all he wants to do is sit and drink, so she goes sightseeing on her own. Unfortunately, she is kidnapped by a desperate group of would-be outlaws led by Juan (Ben Cura). They want a million dollars for her safe return, which Turk is willing to pay, but manic government agent Ben Harding (Mark Valley) is convinced they are terrorists and threatens to arrest Turk for funding terrorism if he gives in to their demands. Aided by his agent's secretary and a hired mercenary, Turk decides to save his wife on his own.

Supposedly an action-comedy, Gun Shy is missing two key components that are the hallmarks of any great action-comedy: the action and the comedy.

One would think director Simon West, the guy responsible for the kitschy cult classic, Con-Air, would bring some of that same over-the-top chutzpah a movie like this is begging for. Instead, we get a bugged-eyed Banderas holding onto his hat as he rides an out-of-control suitcase down a street. Not only is this scene the action high-point, it's representative of the derivative attempts at humor through most of the film. The very second someone dumps a poisonous snake into a hot tub, we're 100% certain which part the male anatomy the animal is gonna chomp down on.

Though the cast tries hard - perhaps too hard - Gun Shy is almost painfully unfunny from beginning to end. Banderas has previously shown he can be quite amusing when required, but here he's stuck with a stupid character who's basically the same exaggerated rock star parody we've seen in countless other comedies. But he's not alone. None of the other characters are remotely amusing or interesting either.

Even at 92 minutes, the film feels like it goes on forever. It also doesn't know when to quit...literally. Provided the viewer even makes it this far, Gun Shy has more end/post-credit scenes than a Marvel movie, none of which serve any purpose...except to repeat the Johnson-biting snake gag again (it isn't any funnier the second time).

EXTRA KIBBLES
FEATURETTE: "The Rock Star, the Pirate and the Cast of Gun Shy"
MUSIC MONTAGE VIDEO: "Just Who I Can Be"
DIGITAL COPY
KITTY CONSENSUS:

BLEH...LIKE COUGHING UP A HAIRBALL
Posted by D.M. Anderson at 7:31 PM