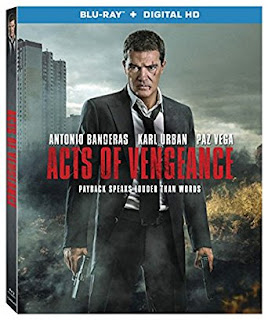 With films like Acts of Vengeance, it helps to keep your expectations in check.

Like the once-mighty Nicholas Cage, John Travolta & Bruce Willis, Antonio Banderas stays gainfully employed by cranking out low-wattage action flicks that generally skip theaters to serve as Netflix filler. And I'm pretty certain all of these guys now have at least one Death Wish rip-off under their belts (Willis actually has an oft-delayed remake of Death Wish in the pipeline...God help us all).

Banderas jumps back into the revenge ring with Acts of Vengeance. He plays Frank Valera, a slick-talking criminal defense lawyer whose wife and daughter are murdered. The police, of course, have no leads and Frank blames himself for not being there. For awhile, his penance-of-choice is allowing himself to be regularly pummeled at underground fight competitions. Then he reads Marcus Aurelius' Meditations, which inspires him to bulk-up, learn martial arts and - most ironically, since he makes his living with words - take a vow of silence until he finds those who killed his family.

Aside from an attempt to intellectualize the action with quotes from ancient philosophical writings, Acts of Vengeance is your standard revenge thriller. Implausibilities are abound, such as Valera transforming into a lean, mean fighting machine in less time than it takes to sing "Gonna Fly Now," Pax Vega as a nurse who inexplicably decides to help him, and of course, underground fight syndicates that are as easy to locate as your local Starbucks. Still, Banderas delivers a dedicated, earnest performance. Unlike Willis or Cage, he doesn't appear to be going through the motions for a paycheck. Considering his age and the physical demands of the numerous close-quarters fight scenes, he's more-or-less convincing, even when squaring up against guys twice his size.

At the very least, Acts of Vengeance is better than Banderas' recent budget bin bonanzas (such as Security and the embarrassing Gun Shy). The film isn't remotely original, but you probably knew that already, and as these things go, it's a decent enough time killer.
EXTRA KIBBLES
FEATURETTE: "Speaking Out on Acts of Vengeance"