Blu-Ray Review: THE MIRACLE WORKER and THE MADNESS OF KING GEORGE

Olive Films serves up two biographical, award winning actors' showcases, both of which chronicle the tragedies and triumphs of their subjects. One is a timeless classic, while a tour de force performance by a British legend keeps the other interesting. 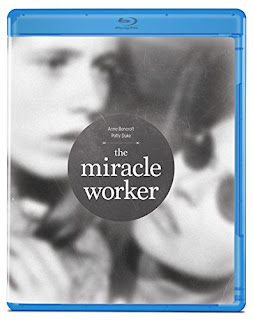 Revisiting The Miracle Worker for the first time in at least 30 years, I was struck by how often it has the look of a claustrophobic horror movie from that era, particularly during the first act. Whether or not that was an intentional aesthetic decision by director Arthur Penn, it's suitably fitting. The scenes in which troubled teacher Annie Sullivan (Anne Bancroft) struggles to reach deaf, mute and blind Helen Keller (Patty Duke) remain as intense and harrowing today as they did 55 years ago.

Of course, everyone knows who Helen Keller is, but this is just as much Sullivan's story. Considering the personal obstacles she herself has to overcome in order to teach Keller literally everything, The Miracle Worker might be one of the most accurately-titled films in history (at-least until Snakes on a Plane came along). Sullivan's resolve is just as inspiring as her student's and one of the chief reasons the film's climax still packs such an emotional wallop.

The Miracle Worker wouldn't be the beloved classic it is today without the performances. Bancroft and Duke both won well-deserved Oscars for the roles they originated on Broadway, the latter getting this writer's vote for the best child performance of all time. But these two aren't the whole show here. Victor Jory and Inga Swenson as Helen's beleaguered parents are effective antagonists; even their frequent clashes with Sullivan's methods are done with the best intentions, meaning we still empathize with them. 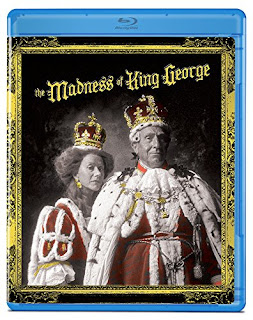 A debilitating dilemma of a different kind strikes the titular character in The Madness of King George.

King George III (Nigel Hawthorne) precariously rules England, still in a tumultuous state after losing control of America. Already somewhat eccentric, George begins to display increasingly bizarre behavior that has those around him questioning his sanity. George's allies want to keep his "illness" secret, while opportunistic members of Parliament - led by George's conniving son (Rupert Everett) - try to exploit it to their advantage and gain control.

Dr. Francis Willis (Ian Holm) is brought in to try and save the king from his dementia. His methods are less barbaric than previous "cures," and if nothing else, the viewer walks away thankful that they don't live in an age when blistering and purges were common forms of treatment. Still, Willis' methods are also an ordeal to endure.

Despite how it was promoted at the time, The Madness of King George isn't really a comedy. Early scenes depicting the king's manic behavior are somewhat amusing, but even then, the viewer might feel uncomfortable laughing with them. Much of that is due to Hawthorne, delivering the performance of his career. He, too, was nominated for an Oscar and is perhaps a little too convincing for these scenes to be anything but troubling signs of a deteriorating mind. The fact that George isn't simply a whimsically daft buffoon sucks much of the fun from the entire film.

Still, Hawthorne's bold performance is something to behold. That alone makes The Madness of King George worth checking out.
Posted by D.M. Anderson at 11:40 AM