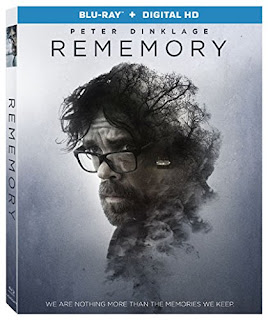 Peter Dinklage doesn't often get the chance to carry an entire movie on his shoulders. In fact, the last time he was top-billed was 2002's The Station Agent. One thing is certain...writer/director Mark Palansky is lucky to have him because Dinklage is by far the main reason to check out Rememory.

The film is a sci-fi/mystery about a box that is able to record and play back people's memories for the purpose of helping them with various psychological problems. When the inventor, Gordon Dunn (Martin Donovan), dies, model maker Sam Bloom (Dinklage) suspects foul play. He steals the box (with remarkable ease) from Dunn's widow, Carolyn (Julia Ormand), and uses it the narrow down the suspects. It could be any number of former test subjects, all of whom suffered hallucinogenic side effects from the rememory machine.

As someone who also has personal reasons for taking the machine - Bloom's trying to come-to-terms with his brother's untimely death - Dinklage treads a fine line between self-absorbed and empathetic, brilliantly conveying his character's uncertainty & regret over his more unscrupulous actions - especially when deceiving Carolyn. Unfortunately, the story itself seldom rises above the mundane. Despite an overall sense of urgency, when one thinks about the machine's purpose, there isn't really a hell of a lot at stake. It all comes to a disappointing resolution that's intended to be haunting, but ultimately doesn't resonate much.

Dinklage, however, comes damn close to saving the entire film, providing nearly all of its emotional heft. Turning in yet-another great performance in a rare leading role, he doesn't disappoint, even if the rest of Rememory does.

NOT BAD...DINKLAGE MAKES IT WORTH ENDURING
Posted by D.M. Anderson at 9:29 PM