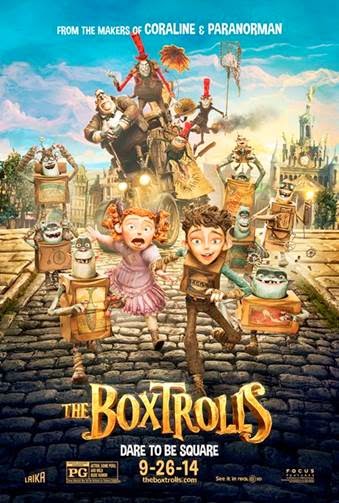 Review by Lucy and D.M. Anderson

I picked up my ten-year-old daughter, Lucy, early from school the other day. Though happy to see me - what kid doesn’t love a short school day? - she asked why she was going home. I replied she wasn't; we had an appointment. Her smile briefly faded before I reassured her it wasn’t a doctor or dental visit…it was something she was going to help me with. During the drive, she hounded me incessantly, and it was amusing to hear her plead “Come on, Dad, tell me” over and over from the back seat. I finally told Lucy her appointment was with The Boxtrolls, and I’d been invited to an advance screening but needed her help to review the film. She was ecstatic…not only was she getting out of school early, but attending a movie she’d been excited about ever since seeing the first trailer. Who better to assist me than someone from the film’s targeted demographic?

Shortly before the lights went down, I reminded Lucy of her important job. “Right, Dad,” she said enthusiastically. “Today we’re colleagues.” (I had no idea she knew the meaning of that word…what an awesome kid I have).

The Boxtrolls is the latest feature-length film from Laika, the stop-motion studio responsible for Coraline and ParaNorman. The title creatures live beneath a cheese-obsessed village, venturing above-ground at night to scavenge for old junk which they use maintain their home, keep the lights on and build various useful contraptions & machines. The villagers have feared the Boxtrolls ever since they allegedly abducted and ate an infant, which is why the White Hats (the stuffy old men who run the town) instilled a nighttime curfew. Meanwhile, opportunistic Red Hat exterminator Archbald Snatcher (Ben Kingsley) offers to eradicate every last Boxtroll in exchange for membership with the White Hats. He and his crew commence hunting the creatures down.

But it turns out the abducted baby was not eaten by the Boxtrolls, but raised as one of their own. Named Eggs (after the box he wears and voiced by Isaac Hempstead-Wright), he's mostly cared for by Fish (also aptly named), who brings him gifts and teaches him music. Eggs is content until, during a scavenging trip above-ground, he bumps into Winnie (Elle Fanning), the neglected daughter of the chief White Hat and out past curfew. That same night, Fish is captured by Snatcher and taken away. Determined to get him back, Eggs risks venturing above-ground during the day with Winne's help (who’s also trying to help him act more like a ‘proper boy’). During their rescue efforts, they discover more about Eggs’ past, and also that Snatcher has a greedy, nefarious plan that’ll affect the lives of everyone above and below-ground.

The Boxtrolls’ story is a bit slow paced at first, but picks up momentum and becomes more interesting as it goes along, throwing some unexpected surprises along the way. It’s often sweet without becoming saccharine, funny without becoming pandering (the laughs are usually well-earned) and suspenseful without becoming too scary (though I could see Snatcher’s allergic reaction to cheese being somewhat traumatizing to some of the wee ones in the crowd). There’s a lot action, especially during the second half, but it never threatens to overwhelm the viewer with visual bombast (well…maybe a little toward the end).

Visually, the characters are imaginatively rendered, their appearance doing much of the work to establish their exaggerated personalities, meaning the villains are suitably grotesque, and the Boxtrolls themselves are charming while never being mistaken for cute. Ironically, it’s the two main characters (Eggs and Winnie) who are the least interesting.

Right from the get-go, the film is wonderful to look at. Like Coraline, it truly looks like a richly-illustrated children’s book come-to-life, though not quite as creepy, and the stop-motion animation is incredible. Maybe because CG-animated movies are now a-dime-a-dozen, one can’t help but appreciate the unfathomable amount of man-hours it took to put this together (though we get a hint of that effort during an end-credit coda…so don’t leave early).

As for Lucy…she loved every minute of The Boxtrolls, already asking me on the drive home if we could pick-up the DVD when it comes out. Dad enjoyed it as well (though he wasn’t expecting to), especially Snatcher's ultimate fate. Without giving too much away, it’s straight out of Monty Python and laugh-out loud hilarious.