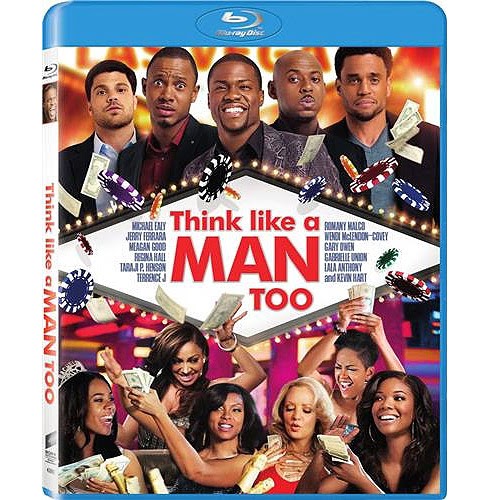 Man, where do I start?

Probably with stating up front I haven’t seen the original Think Like a Man. I have a natural aversion to comedies featuring all-star casts. Movies like this are usually so concerned with making sure everyone gets their time in the spotlight that they forgo such other necessities as character development, a consistent tone and an actual story worth the efforts of the talent involved. The bloated Oceans 11-13 couldn’t pull it off, and with the exception of the original Airplane!, nor could any of the so-called parody films which weigh us down with famous faces to remind us how much fun we’re supposed to be having.

While I can’t compare this obligatory sequel to the original, it’s not really necessary. Think Like a Man Too is a terrible film in its own right…schizophrenic, creatively bankrupt and almost completely bereft of characters we can identify with. Worse yet, it's seldom even remotely funny. That’s a damn shame when you consider the film is loaded with decent actors, whose talents are completely wasted because every character is painted in broad, one-dimensional strokes. All the guys are either hapless buffoons or sensitive studs, while the women are all you-go-girl loudmouths or self-conscious waifs who emerge as glamorous beauties after a single night in Vegas.

Worst of all is comedian Kevin Hart as Cedric, who’s charged with putting together one last big fling for the guys before Michael & Candace’s Vegas wedding. Even though he’s the most famous face in the cast, Hart’s given way too much screen time, which would be fine if Cedric were at-least amusing. But he’s obnoxious, manic, grating and so embarrassingly unfunny that his mere presence ruins nearly each scene he’s in. While his co-stars are busy doing whatever they can to bring some kind of complexity to their shallowly-written characters, Hart is simply unleashed to do his thing. His performance is nearly as painful to endure as Tyler Perry’s Madea. The fact Cedric is also the film's narrator is the straw which breaks the camel's back.

Tonally, the movie shifts uncomfortably between broad comedy (which is seldom funny) and heavy-handed sentimentality on a regular basis, with nearly zero transition from one scene to the next. The most glaring example is a totally out-of-the-blue music montage where the female leads jump out-of-character to become sexy divas in a music video (complete with onscreen end-credits). This scene serves absolutely no narrative purpose whatsoever (and if intended as a joke, I sure as hell didn’t get it). The same goes for all the gratuitous celebrity cameos throughout; the story (such as it is) frequently grinds to a complete halt just to squeeze the likes of Drake and Floyd Mayweather Jr into the movie, for no reason other than to include another famous face.

Considering the entire cast of the first film is back (how often does that happen?), it’s a shame Think Like a Man Too is a hastily-assembled, clichéd and slapdash follow-up. One would think these characters would have something more interesting to do than wander Las Vegas (the film often comes across as a promotional vacation video). We’ve seen all of this before in better movies, like The Hangover. The cast does their best (even Hart, who was probably told to simply be himself), but one can’t help but suspect a bit of contempt for the audience from its creators, who appear content to coast on clichés and caricatures.

I could go on, but man, where would I stop?