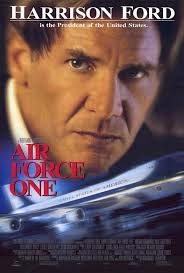 One weekend, while his wife was out of town, Bill O’Reilly invited his good buddies, Sean Hannity, Ann Coulter and Mike Huckabee over to his house for a movie night…

The four engage in high-fives and chest-bumps before Bill pops the disc into his DVD player. Then, after grabbing more beers, they sit on the sofa together as the movie begins...

Sean gets up to grab everyone another beer. They all watch in relative silence until Air Force One is overtaken by a group of Russian terrorists (led by Korshunov, played by Gary Oldman) still loyal to their captured dictator, Ivan Radek, who killed over 200, 000 people. President Marshall (Harrison Ford) is escorted below deck by Secret Service to the escape pod, but since his family is still onboard, he launches the empty pod to fool the terrorists into thinking he got away.

BILL: Escape pod. Brilliant strategy. Only in America.
SEAN: Damn straight! I love documentaries.
MIKE: I love porno documentaries!
ANN: I can imagine me and George W. rockin’ that pod!
MIKE: So can I!
SEAN: Wait…wasn’t there another movie where Air Force One had an escape pod?
BILL: You’re thinking of Escape from New York. It’s a well-known fact John Carpenter stole the idea from this movie.
SEAN: But didn’t Escape from New York come out in 1981, sixteen years earlier?
BILL (tapping Hannity on the forehead): Use your noggin! Carpenter’s a conniving Hollywood liberal who knew a right-thinking republication strategist would eventually think of it, so he stole the idea in advance -
ANN: To save a fucking British president...like that would ever happen.
BILL: So shut your hole, Sean. And slow down on the beer. This is a no spin zone.

Vice President Kathryn Bennett (Glenn Close) arrives at the White House Situation Room, where she is briefed on the situation. The terrorists threaten to shoot a hostage every half hour until General Radek is released.

ANN: What! A woman vice president? Bill, you know how much I hate science fiction!
MIKE: Then let’s watch pornos!
BILL (raising his hands): Okay, okay…we all know Hollywood likes to indulge in a bit of fantasy now and then…like Toy Story and Zero Dark Thirty. You just gotta suspend some disbelief.
ANN: I can’t.
SEAN: I dunno…Bennett seems pretty reluctant take action and shoot the plane down, probably ‘cause she‘s waiting for a man to take charge. Ain’t that just like a woman?
ANN: Good point. If I can accept talking toys, I guess I can put-up with a woman vice president. (Under her breath, she adds, “Even though Glenn Close looks like a dyke").

Soon after, President Marshall uses his military skills to start taking out the terrorists one by one.

As Marshall makes his way through the plane, kicking-ass and blowing terrorists away, Sean unconsciously slips his hand down the front of his own trousers.

BILL: Sean, what the hell are you doing on my sofa?
SEAN: Come on, Bill…this is the sexiest movie ever! What are you, a eunuch? You can’t tell me you haven’t bopped your baloney to this before!
BILL: Not around my colleagues, for Christ’s sake.
MIKE: You need to lighten up, O’Reilly. Me and my frat brothers used to do this all the time on weekends

Mike stands, drops his pants and commences his own five-knuckle-shuffle.

MIKE: Ah, yeah…
BILL: Come on, guys…I just had everything steam cleaned!
ANN: Then why don’t you be a congenial host and go fetch us some towels…

Ann hikes up her skirt to reveal a hunk of anatomy that would make John Holmes proud. All the men collectively gasp, though none are actually surprised. Bill stands up and hits the pause button, right before Marshall pulls the rip-cord of the parachute which snaps lead-terrorist Korshunov’s neck.