DAY OF THE DEAD (1985) and the Supermarket Slaughter 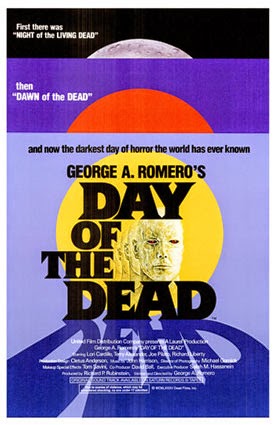 Before I decided to make a career change, I worked in the food industry for many years, gradually working my way up to the title of sous chef at a hotel restaurant. My duties were varied…overseeing the evening kitchen staff, making schedules, preparing banquets for wedding parties & conventions, planning dinner specials and, on a few occasions, covering the executive chef’s ass whenever he failed to show up after all-night cocaine binges.

The restaurant business may look glamorous on Food Channel, but trust me, very few in this line of work become rock stars like Bobby Flay. For the most part, the job is high stress/low reward. Working as a sous chef is like being on Star Trek where Kirk makes all the recklessly heroic decisions, then relies on Scotty to bail him out (and considering how frequently they came and went, our dishwashers were similar to the red-shirted rubes on Star Trek who died minutes after beaming down to a new planet).

So yeah, despite my impressive-sounding job title, it was a shitty gig. And like a lot of folks stuck with terrible positions, I often tried to have a little fun on-the-job to alleviate the stress and boredom. Since I usually worked evenings, when most of the other managerial staff was gone, the kitchen crew and I played a lot of practical jokes on others, new employees in particular. Some of the gags were simple, such as spiking someone's coffee with Tabasco or taping all their cigarettes together.

But what I truly loved were gore gags, most of which I learned from Tom Savini.

Savini was a combat photographer during the Vietnam War, capturing images which eventually influenced his career as a movie make-up artist, where he became renowned as the 'Godfather of Gore' for his horrific and bloody special effects. He was also an engaging personality himself, sometimes appearing on Late Night with David Letterman to show how he accomplished his gore gags in such films as Dawn of the Dead and Friday the 13th. I was a big fan of violent horror at the time, and amazed at the simplicity of most of his tricks. All it takes to make movie blood is Karo Syrup and a bit of food coloring. Need to shoot someone in the head? Just attach a blood-filled condom to an actor’s head with a tiny charge to make it explode. To slash someone’s throat with a butcher knife, simply cut out part of the blade to make it look like it’s slicing flesh when pressed against the neck. Need guts? Discarded animal parts from a local meat market work just fine, as long as you keep them refrigerated until you need them (which didn’t happen on the set of Day of the Dead because the refrigerator was unplugged).

Savini’s crowning achievement as a make-up artist were the gore effects in Day of the Dead, George A. Romero’s initially-maligned follow-up to Dawn of the Dead. Where Dawn’s blood and gore was pretty cartoonish, Day’s depiction of bodily dismemberment is far more realistic, and the zombies themselves truly look hideous, some literally falling apart as they walk. The effects still hold up today, better than many modern zombie films (including Romero’s own follow-up, Land of the Dead). This is because flying limbs, exploding bodies and bullets-to-the-head just aren’t very convincing when rendered in CGI (just compare the 1982 & 2011 versions of The Thing if you’re still in doubt). When it comes to bodily mayhem, there’s still no substitute for good old fashioned practical effects. As Savini demonstrated with Day of the Dead, it was possible to create some truly disgusting make-up effects simply by visiting the grocery store.

And I had most of this stuff at my disposal in the hotel kitchen!

Hence, there were numerous occasions on slow nights that one of my line cooks suddenly began coughing up blood, or stumbled into the wait-station with a meat cleaver buried in his forearm (a gag stolen from Day of the Dead). We usually attempted these gags on brand new employees, mostly the waitstaff. Our pranks didn’t always work because most of us weren’t what you’d call convincing actors (my grill cook, Eric, could seldom contain his laughter). But when they did, it was magical. I’ll never forget Patti’s horrified face when my prep cook, Antonio, asked her for a Band-Aid because there was a meat thermometer lodged in his neck.

My personal favorite was when we convinced a waitress that I’d been bludgeoned to death with a meat mallet by another staff member. For this one, Antonio and I actually made an effort to set the stage beforehand by faking a heated argument for the sake of our newest waitress, Tina, who was working her way through college at the time. I ‘fired’ Antonio in a fit of anger. He tore off his apron and threw it to the floor, yelling, “This ain’t over! You just watch your back motherfucker!” Then he stormed off, shoving a stack of onion ring baskets to the floor as he left (a nice touch…Antonio was always the best actor of the kitchen staff).

Anyway, about a half-hour later, Patti (once a victim, now a co-conspirator) told Tina to go into the walk-in cooler in the back of the kitchen to get more parsley for garnishing plates. As she opened the door, there I was, lying on the cold floor, head drenched with Karo Syrup and red food dye. A few feet away was a bloodied meat mallet, chunks of leftover pork hanging from the protrusions. Antonio originally suggested cutting some of my hair to stick on the mallet among the meat, but I nixed that…I’m no method actor. Besides, the gag was convincing enough as it was.

Tina didn’t scream, though that would have been music to my ears, like the old Hollywood cliché of all females screaming uncontrollably when confronting a dead body. What she did do was run and grab the kitchen phone outside the cooler, dialing 911 to report the incident. Suddenly, I couldn’t get off the floor fast enough. I grabbed the phone from her hand and hung up. She looked at me incredulously, just as Antonio burst from my office nearby, laughing his ass off. Then I started giggling, too. That’s when Tina slapped me really hard (which made Antonio laugh even louder) and stormed back to the wait-station, forgetting the parsley. I don’t know if they had Star 69 or instant call-tracing back then, but fortunately, no cops showed up.

I think part of the reason I enjoyed this gag so much is because Tina was arrogant and full of herself, always reminding the rest of us she on her way to better things, and working in the food industry was beneath her. Apparently having no sense of humor, she may have also been upset at being duped by folks she thought were intellectually inferior. Tina didn’t speak to us too much afterwards and quit a few weeks later.

I eventually hated my job enough to go back to school and earn a teaching degree, a much more rewarding profession (at the very least, I don’t come home reeking of onions). Still, part of me sometimes misses doing those awesome gore gags, which were a great release from the thankless stress of restaurant work. Doing such pranks in my current job as a middle school teacher would get me fired six ways from Sunday. Still, if I were to win a Powerball jackpot, I might just consider going out in a blaze of glory and burn my bridges as spectacularly as possible…by using Tom Savini’s timeless techniques to simulate my violent death in the middle of class, traumatizing the little bastards.

At the time, Savini’s effects were the saving grace of Day of the Dead, a movie initially criticized as slow and overly talky, though today it’s considered a cult classic. But personally, I prefer to look at Day of the Dead as more of an educational film, a movie which inspired my creativity while working in a thankless profession.
Posted by D.M. Anderson at 11:43 PM