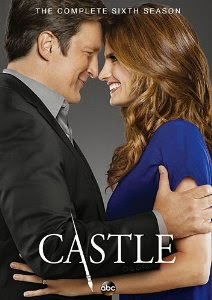 I always enjoyed Castle whenever I came into the room while my wife was watching (she loves the show, especially during syndicated marathons on TNT). But it’s never been part of my weekly viewing schedule. No reason, really…it’s just one of those programs which simply fly below my radar. But here it is, six seasons in with a seventh on the way. Castle has never been a ratings blockbuster, and you’ll probably seldom hear it mentioned among anyone’s favorite shows, but solid writing and terrific chemistry among the main cast have made this romantic comedy/crime drama a quiet hit over the years. And there’s no better way to watch it than binging on one disc after another.

Season Six has Castle (Nathon Fillion) and Beckett (Stana Katic) solving intricate mysteries each episode while simultaneously planning their upcoming wedding (he proposed to her at the end of Season Five). While that amusing story arc is ongoing throughout the season, most of their cases are wrapped up in a single episode. As with most episodic crime dramas, some stories are more intriguing than others (a few mid-season episodes are a bit less intriguing). My personal favorite has a desperate woman, accused of murder, who’s taken hostages and demands Castle (her favorite writer) to help clear her name. The funniest (and somewhat bittersweet) episode is the one where the entire police division (at Castle’s insistence) is forced to convince a traumatized former mob boss to ID a killer by pretending it’s still 1978 (including clothing, cars and the décor of the precinct).

Of course, what makes a show like Castle successful is its characters. Yeah, we all miss Firefly, but Fillion carries Castle with the same humor and delivery which made Firefly an endearing cult classic. The rest of the cast shines as well, especially Susan Sullivan as Castle’s sometimes embarrassingly free-spirited mother. As Beckett, Katic continues to be a terrific cohort/love interest. Most programs which create sexual tension between its lead characters tend to fall apart once they actually get together, but so far, the budding romance between Castle and Beckett is funny and charming (it probably helps that their relationship still takes a backseat to the individual cases at-hand).

The season ends with an ominous cliffhanger which will have longtime fans (like my wife) chomping-at-the-bit for Season Seven to start. While I have a sneaking suspicion everything will turn out hunky-dory, we still like these people enough to worry about their well being. Sans commercials, this DVD set makes Castle as binge worthy as they come.