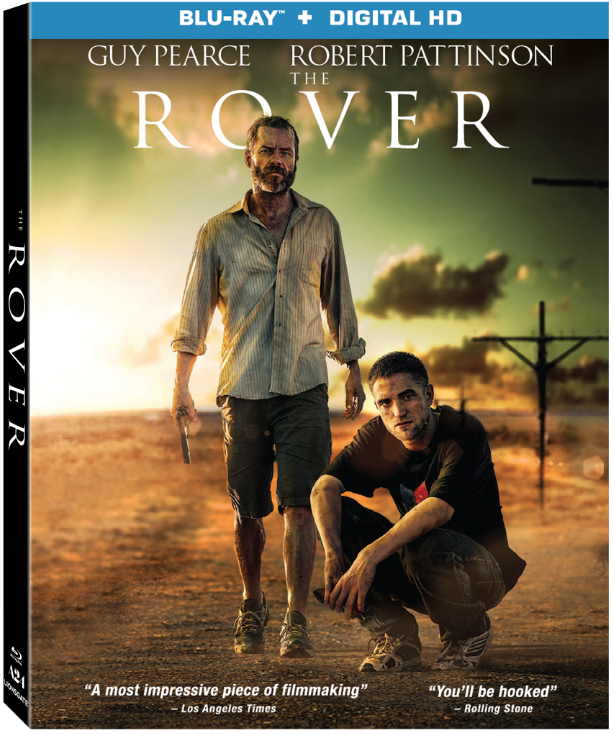 I'd like to think the following scenario has probably already happened...

Picture, if you will, Tiffany, Clare and Heather…a teen trio of BFFs all suffering from Twilight withdrawl. They happen to notice The Rover on the shelf at Wal-Mart or among the choices on Netflix or Redbox. Robert Pattinson (who still adorns their bedroom walls in his pasty-white splendor) is one of two co-stars whose name is prominently featured above the title. These card-carrying members of Team Edward gleefully pool their allowance money together to gaze once-again at the man of their dreams without a second thought, never bothering to read the plot synopsis.

The movie begins, taking place in the desert wastelands of Australia ten years after a global economic collapse. There’s a shot of a scraggly old guy sitting in his car, flies buzzing around his face. A few minutes later, his car is stolen by a gang of other scraggly old guys who just crashed their pick-up during a robbery getaway. The first scraggly old guy restarts their pick-up and tears down the highway after them, determined to get his car back.

Tiffany slightly frowns. This looks sort-of like that old movie her dad watches, the one with a bunch of scraggly old guys in assless pants killing each other for gasoline, only the scraggly old guys in this new movie look like her hungover uncle who wakes up on the living room couch each year after the Fourth of July barbecue.

But this movie's bound get better when Edward shows up to save the day, since all these other scraggly old guys are too ugly to be heroes, especially Eric (Guy Pearce), who’s not only ugly…he’s mean, shooting a man just to avoid paying for the gun he needs to kill those who took his car. Right?

Clare thinks, who cares about this dirty old car? What’s so special about it? Where’s Edward, dammit?

Wait a minute, Heather slowly realizes with dread a few scenes later. That guy lying on the road holding a gun, his gut bleeding from a gunshot wound...he looks familiar…those eyes…that face…

No! That can’t be Edward! Look at that awful crew-cut, those disgusting brown teeth, the bruised face, the dirty Goodwill clothes!

Tiffany, Clare and Heather collectively sigh in despair. The Rover is one of those movies where Robert Pattinson demonstrates he’s actually a pretty damn good actor. They’d heard rumors that he hated Twilight and wanted to distance himself from Edward as much as possible, but refused to believe such an awful thing.

To make things worse, Pattinson's character, Rey, is part of the same gang of scraggly old guys who stole the initial scraggly old guy’s car, then left-for-dead after getting shot during the robbery. Worse than that is the revelation Rey is, not only a bad guy (sort-of), but a total idiot who ends up accidentally shooting a little girl.

The girls are deflated…The Rover is no Twilight…not even Water for Elephants. It’s moody, violent and sort-of depressing. They are also increasingly angry that Eric is so obsessed with that stupid car, killing a lot of folks just to get it back. Still, they spent their allowance, and maybe Edward does some awesome shit later on, so they stick-it-out like the loyal fans they are.

For the final scene, The Rover does indeed explain why the car is so important to Eric. Depending on the mindset of the viewer, this coda is either bittersweet or ironically funny. Without giving anything away, trust me, you will not see it coming.

In the end, Tiffany, Clare and Heather are confused and disappointed. They didn’t expect a film driven more by its tone and dynamic performances than the actual story, where long moments of silence and simple unexplained actions says more about these characters than an entire page of dialogue. Nor did they expect Pattinson to let them down by almost completely disappearing into his role (like a real grown-up actor). They may not appreciate it now, but Pattinson’s performance is a revelation. Even then, it’s Guy Pearce who successfully carries the film on his shoulders. We identify with him almost immediately, though some of his actions has us questioning his sense of morality. But after a solemn (and revealing) speech about absence of accountability for murder in this bleak world, Eric reveals a complexity totally lost on the likes of Tiffany, Clare and Heather.

I chuckle at the thought of this entire scenario occurring more than once (and you just know it did), where Twi-hards watch in slack-jawed horror as their precious Pattinson drops the glamour to show he’s capable of more than smoldering and sparkling. The Rover is a bleak, thought-provoking gem that Tiffany, Clare and Heather may not appreciate, nor will anyone expecting a Mad Max retread. If you don't count yourself among that crowd, The Rover is a wonderfully satisfying film which presents a cynical vision of a violent world, yet subtly suggests not everyone has been totally stripped of their humanity.