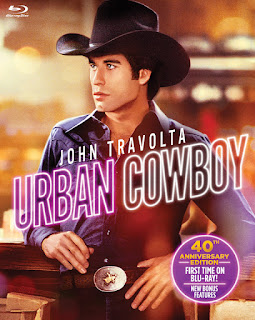 I’m willing to wager a lot of you don’t remember the first time John Travolta was the bee’s knees, a genuine star whose bread & butter was high concept, audience-friendly pictures, most of which were created to sell just as many soundtrack albums as movie tickets.

And I’m pretty certain few of you recall when Debra Winger was a sex symbol of a different type. Never striking or perfectly-sculpted, she had a natural, girl-next-door quality that somehow rendered her more accessible. Heather Locklear might have been out of our league, but someone like Winger seemed at-least plausible.

And I’ll bet some of you weren’t around to endure those dark days when country music & fashion had the audacity to creep into the mainstream, to say nothing of those bizarre contraptions known as mechanical bulls. Their popularity was only exacerbated by movies like Urban Cowboy.

Finally, I’m sure most of you were today-years-old when you heard Urban Cowboy is finally on Blu-ray, 40 years after it was first released. Considering the film was a sizable hit and a bit of a cultural phenomenon, I’m kind of surprised it took this long. I’m also surprised it wasn’t released as part of Paramount Presents, the studio’s new series of their most iconic films. Considering the focus has mostly been on titles from their high-concept glory days, you’d think this would be a no brainer.

Neither as timeless as Grease or as gritty & groundbreaking as Saturday Night Fever, watching Urban Cowboy today is sort of kind unearthing a time capsule. This is Travolta cashing in on a formula he helped popularize, albeit with diminished results. Oil worker/bull rider/line dancer Bud Davis is less interesting than Tony Manero, though more immediately likable if congeniality is your thing. But ultimately, the film is calculated to exploit a growing fad by incorporating the skills of Hollywood’s preeminent trendsetter of the time.

In that context, mission accomplished, since I’ll bet a few of you who were kicking around back then might have been inspired to git yerself a pair o’ shitkickers and take-on one of those mechanical monsters. Now that I think about it, ol’ Travolta once inspired people to do a lot of silly things. Of course, the film is wall-to-wall with the music of the day, mostly “urbanized” country tunes that probably offended purists but went down easy for the masses. A few of those artists make cameo appearances in the film, as well.

Urban Cowboy is also notable for being the last successful “Travolta Film” - one built around his persona and bankability. That would eventually turn out to be a good thing, since his best performances were still ahead of him. Still, this is an interesting relic from an era when John Travolta was not-only a movie star, he showed us what to wear and how to dance.