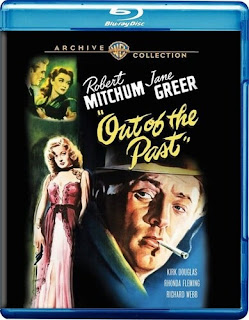 You may be cool, but you’ll never be Robert Fucking Mitchum cool.

I don’t made such a bold statement lightly. Throughout the only history that matters – movie history – a lot of guys fit the dictionary definition of cool. I could list-off the usual suspects, though chances-are you can guess who’s on it. And by the way, if Stallone happens to be on your own personal list, you should probably turn-in your Movie Man-Card right now. Sly ain’t fit to hold Mitchum’s fedora.

But Mitchum is one of the few who’s earned the right to change the middle name on his birth certificate. Take Out of the Past, for example. Not only is it one of the most superlative examples of classic film noir, it is prime Robert Fucking Mitchum.

RFM is private dick Jeff Markham hired to find gangster Whit Sterling’s (Kirk Douglas) wayward wife, Kathie (Jane Greer). He falls hard for her instead and the two decide to disappear together. But even when Whit shows up in Mexico to confront him on his progress, Jeff doesn’t lose his cool. And even when Kathie kills Jeff’s greedy partner, he doesn’t loose his cool. Years later, when Whit finds him running a desert gas station under an alias, Jeff never loses his cool. And finally, when he knows he’s being set-up to take the rap for a greedy lawyer’s murder, he keeps his cool, methodically playing Whit and Kathie against each other. For him, cool is practically a survival tactic.

Cool people don’t waste a single minute reminding others how cool they are, but the coolest guys don’t seem to be aware of how cool they are. It’s in their DNA and requires zero effort, like breathing. Robert Fucking Mitchum has always given off that vibe, but it’s probably most prevalent in Out of the Past, where his character plays everything close to the vest and takes no shit from anybody, not a powerful mob boss or shifty femme fatale. And even though he’s fully aware of his own mortality, it’s simply part of doing business. You don’t get any cooler than that.

Of course, Out of the Past remains irresistibly re-watchable, not only because of Robert Fucking Mitchum in his prime, but a wonderfully twist-laden story and great performances that include young Kirk Douglas in a rare villainous role. It’s the kind of classic that makes you wanna buy a trenchcoat, don a fedora and take up smoking, which will definitely make you cooler…

MEE-OW! LIKE TAUNTING A MOUSE TO DEATH
Posted by D.M. Anderson at 12:01 PM