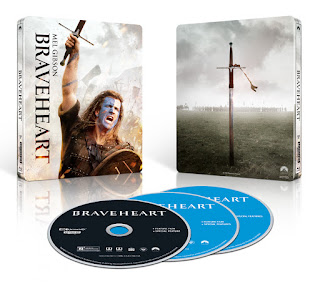 Before he went all funny on us, Mel Gibson could do no wrong. In addition to being one of the most bankable actors in the world, 1995's Braveheart showed he was also a director to be reckoned with. Since it's generally considered a modern classic today, it might be difficult to appreciate what a risk this film was back then. Big, bold three-hour historical epics weren't being made much at the time, let-alone one directed by a guy with just a single small film under his belt.

Five Oscars and $200 million later, not-only was it Gibson's biggest film to date, one could easily argue it opened the doors for such action epics as Saving Private Ryan, Gladiator and Alexander. And as history has shown, Braveheart ended up being the pinnacle of his career. Say what you will about the man now, Mel Gibson put together one hell of a film that stills holds up as grand, voracious entertainment, despite hipsters making great sport of its historical accuracy.

Besides, the film never claimed to be a history lesson. Rousing, romantic, tragic and gleefully gory, Braveheart is audience manipulation at its most effective. Only cynics get wrapped up in such petty details as a skewed timeline, inaccurate depictions of historical figures and the car parked on the battlefield. It's all about good & evil, heroes & villains, love & revenge and, of course, buckets of blood & brutality. What's not to love about that?

It's hard to believe Braveheart is now 25 years old. As modern historical epics go, it still ranks among the most entertaining and is always worth revisiting from time to time. So of course it deserves some kind of commemoration. But be aware, 4K and SteelBook editions have been released before, as well as several Blu-rays that are loaded with the same extensive bonus features that are included here.

Like the simultaneously released 4K SteelBook of Gladiator, the only difference is the packaging itself, which differs from previous editions and features one of the film's more iconic images. If you've never added Braveheart to your shelf, the 25th Anniversary Edition is a good as it gets. But if you already have it on 4K Blu-ray, time to decide if the new packaging is worth double-dipping for.

MEE-OW! LIKE TAUNTING A MOUSE TO DEATH.
Posted by D.M. Anderson at 4:08 PM