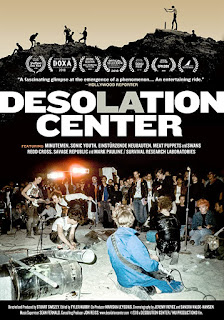 Fed up with the local mainstream's overall contempt for the L.A. Punk scene, super fan Stuart Swezey took it onto himself to organize a series of shows – collectively dubbed Desolation Center - that would take place far away from media and police scrutiny.

Assembled on-the-fly with few resources and nearly no promotion, these grassroots gigs were mostly held in the remote desert. Ticket buyers, trucked to the locations in old school buses, literally had no idea where they were going on the day of the show (which was part of the experience). The shows themselves featured such underground antiheroes as Minutemen & Sonic Youth, as well as performance artists like Mark Pauline (who blows shit up) and the avant garde German group, Einstűrzende Neubauten (who sound like they’re blowing shit up).

Though pretty self-impressed with my own offbeat musical interests back then, I was today-years-old when I first learned of these shows. And I'd be willing to wager most folks who earned their hipster degrees from Lollapalooza and Coachella have never heard of Desolation Center, either. But none other than Perry Farrell himself shows up in this movie to give props to the little festival that inspired his own.

Desolation Center is a fascinating film that documents the state of L.A. punk circa 1983 and how it inspired Swezey put together these four irregularly-scheduled shows. Given the passage of time since then, the vintage footage is murky at best. But at the same time, the scarcity of quality footage sort-of adds to the mystique of the events. Interspersed are retrospective interviews with dozens of artists who participated and fans who attended. Their stories are engaging enough that the film might even appeal to those who hate the music itself (it is an acquired taste). In fact, my wife – who was weened on Duran Duran – found the film very entertaining, and not at the participants' expense.

If your knowledge of the underground LA punk scene ends with Black Flag, Desolation Center is a must-see. Filled with vintage footage and interesting interviews – including a few cult legends – it's an affectionate and nostalgic look at a music festival that would be hugely influential, but few ever knew about.

MEE-OW! LIKE BEING TURNED LOOSE IN A BIRD SANCTUARY.
Posted by D.M. Anderson at 2:18 PM