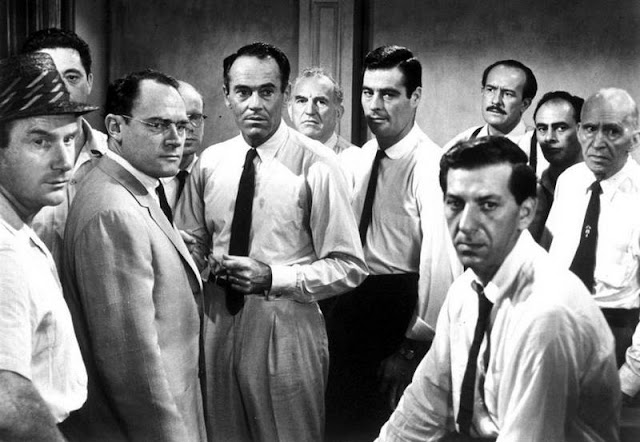 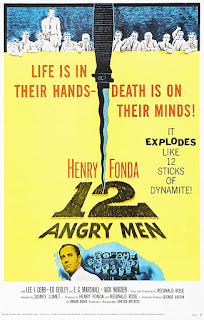 I had to report for jury duty today. I fucking hate jury duty.

I should amend that last statement, since I've never actually sat on a jury. This was the fifth goddamn time I've been summoned and not-once have I made it past the waiting room to be questioned by the judge and attorneys. My civic duty has so-far consisted of sitting. I once sat for 16 fucking hours over two days – reading three novels and subjected to a nonstop barrage of Fox News' verbal vomit from the overhead TV – just to be sent home with nothing but a thank you and a $15 reimbursement for parking. That's a damn shame because I've always been ready for the judge's questions with a variety of creative responses to avoid being selected, such as ending each of my answers with “according to prophecy.”

Perhaps more effectively, I could simply recite some of the bigoted bile spewed by Juror #10 in 12 Angry Men:

Look, they're lushing it up and fighting all the time and if somebody gets killed, so somebody gets killed! They don't care! Oh, sure, there are some good things about 'em, too! Look, I'm the first one to say that! I've known a couple who were OK, but that's the exception, y'know what I mean? Most of 'em, it's like they have no feelings! They can do anything!

I'm pretty certain quoting any line by that character – out of context, before being asked a single question – would get me immediately excused. One brief uncomfortable silence later, my obligation to the county would be fulfilled.

Since driving in downtown Portland is like playing Tetris with cars, I decided to take the commuter train to the courthouse. I generally hate public transportation because a lot of people who use it don't seem to have any particular destination in mind. For them, the train is more of a social gathering. Worse yet, some are under the mistaken impression I'm open to friendly banter, even if it's one-sided. The last time I rode the train, a guy who smelled like taco meat decided to regale me with his days as a bounty hunter, occasionally pausing to swat imaginary flies. I would have moved but there were no other available seats, so I simply did my best to ignore him.

Or maybe this was how he planned to avoid jury duty and was simply getting into character.

But on a more positive note, today's train was relatively empty, even though it was rush hour. That's because the COVID-19 pandemic is still raging, so not-only are masks required to ride public transportation, social distancing guidelines allow only 26 people per car, meaning I pretty much had a section all to myself.

See kids...even global pandemics have a bright side.

Since this wasn't my first rodeo, I brought a backpack carrying my Chromebook, a water bottle, a bag of Funyuns and the Stephen King novel I got for Christmas but never got around to reading. And who knows...perhaps coffee & Funyun breath might turn enough stomachs to get me excused right away.

But that wasn't gonna happen because suddenly I realized I left my coffee tumbler on top of the ticket dispenser at the station where I boarded. This didn't bode well for those poor bastards downtown. Coffee is my personal heroin and without it, there was a distinct possibility the Multnomah County Courthouse would soon be sending out a batch of jury summonses for a murder trail. Thank God my bounty-hunting, fly-swatting friend wasn't around to incur my wrath.

Hopefully, there would be an open Starbucks downtown to defuse an already-explosive situation.

Whenever I receive a jury summons, 1957's 12 Angry Men inevitably comes to mind. It’s arguably the greatest courtroom drama that doesn't actually take place in a courtroom and undoubtedly the greatest film ever set in a single room. Based on the Reginald Rose play, the story has 12 nameless jurors deliberating the fate of a young man on trial for murdering his own father. Though the boy's ethnicity is never mentioned, stereotypical comments and assumptions made by certain members of the all-white jury make it clear he's a minority. Their initial 'guilty' votes are also supported by overwhelming, seemingly irrefutable evidence.

Initially, Juror #8 (Henry Fonda) is the sole 'not guilty' vote and the only one with enough compassion and empathy to discuss the facts before condemning the boy to death. On the other end of the spectrum is the aforementioned Juror #10 (Ed Begley), who's clearly a racist, and Juror #3 (Lee J. Cobb)...belligerent, judgmental and increasingly infuriated as Juror #8 finds fallacies in the testimony, gradually prompting other jurors to change their vote. But in one of the film's most powerful moments, we eventually learn why he's so angry, which is actually kind of heartbreaking and ultimately has nothing to do with the boy's race (though it doesn't make Juror #3 any less of a dick).

Once downtown, I debarked the train at the stop nearest the courthouse. Strutting down the sidewalk was a tough looking young man who either just climbed out of a time machine or was cosplaying as Benny Blanco from the Bronx (a gangster played by John Leguizamo in Carlito's Way). He was decked-out in a similarly flashy three-piece, complete with a wide-brimmed fedora and a rose in the lapel. He even had the same pencil-thin mustache. Since he was heading the same direction as my destination, I followed from a discreet distance. When he reached Pioneer Courthouse Square, he suddenly perched himself on one of the benches, produced a big bag of bird seed and commenced feeding the pigeons. An elderly, white-haired lady approached and smiled. He greeted her by-name as she joined him on the bench, then they began feeding the birds together. Considering his look and demeanor, I was surprised these two actually knew each other.

Because of 12 Angry Men...I always picture juries as a batch of weary guys in a dingy room, ties loosened and shirts pit-stained, pounding the table as they vigorously debate someone's fate. I also tend to wonder which of those guys is the most like me, because one of the film's greatest strengths – besides themes that are still timely today – is its rich, believable characters. Every one of them resembles somebody we've all had pleasure or displeasure to know in real life. That somebody may even be ourselves.

Of course, we'd all like to think we're Juror #8, an analytical, cool-headed leader with the resolve to stand by his convictions and the temperament to avoid making snap judgments. But honestly, who hasn't made relatively harmless face-value evaluations of people we've never met personally? What assumption did I make of Portland's own Benny Blanco? While he probably didn't wake up this morning and head downtown to bust a cap in Al Pacino's ass, it never crossed my mind that a guy resembling a high-toned gangster would begin each day fattening the pigeons with an old lady. Just because someone looks or behaves a certain way doesn't mean you know them. Yet some of the jurors in 12 Angry Men base their initial vote on similarly ignorant presumptions.

Unfortunately, I'm not as admirably unassuming as Juror #8, but at-least I'm not as bitter as Juror #3 or as ignorant as Juror #10. Given my overall attitude toward the idea of jury duty in the first place, I suppose I'm most similar to Juror #7. As played by Jack Warden in the film, Juror #7 doesn't want to be there, either. With a couple of baseball tickets burning a whole in his pocket, he just wants to wrap things up and get the hell out of there. As the deliberation drags on, impatience is the main reason he eventually changes his vote to 'not guilty.' I'd like to think I wouldn't have such an indifferent attitude in a murder case, but would the prospect of lengthy deliberations influence my own vote? I'm not sure I want to know the answer to that.

In that respect, if I intentionally torpedoed my chances for jury selection today, I'd still be doing my civic duty by making certain they selected someone who actually gives a shit.

As it turned out, I didn't have to worry about it anyway, and this time I didn't even make it to the waiting room. I was met outside the courthouse by a clerk (because, you know...pandemic) who took my jury card and informed me that trial selection was canceled. She said I should have checked my voicemail, but since I showed up, I was free of my obligation to the county for another two years. It's a good thing I was wearing my COVID mask so she couldn't see my shit-eating grin.

Suddenly free for the fifth time, I headed back the way I came with an extra spring in my step. Benny Blanco and his lady friend were still on their bench, now surrounded by a legion of hungry pigeons. It also looked like one of those ungrateful birds crapped on the brim of his fedora, but Benny didn't seem to notice.

And after the hour-long return trip to my neck of the woods, the coffee tumbler I left behind was still sitting atop the ticket dispenser, which was awesome because it cost be twenty bucks. But even though I knew its contents would still be hot, I didn't dare take a sip, no matter how badly I needed a caffeine jolt at that point. For all I knew, some crazy bastard came along and used it for a piss jar...maybe even my bounty-hunting, fly-swatting buddy.

Considering I'd been dreading this day for weeks, everything suddenly seemed to be going my way. With this run of good luck, I should have stopped by 7-Eleven on the way home and grabbed me some lottery tickets. As for 12 Angry Men, the film remains compulsively watchable and - considering our current cultural turmoil - might be even more thematically relevant than it was in 1957. And who knows, maybe someday we can all be like Juror #8.
Posted by D.M. Anderson at 12:02 AM