SNIPER: ASSASSIN'S END (but probably not the franchise's) 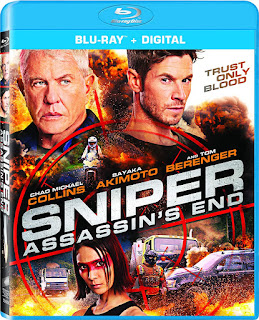 For those of you keeping count, this is the eighth film in a franchise that began with 1993's Sniper, which remains the only one that was ever released in theaters.

And for those of you keeping score, Sniper: Assassin's End marks Chad Michael Collins' fifth go-round as the main protagonist, surpassing original star Tom Berenger, who still pops-up to boost the film's marquee value. But while the franchise will almost certainly continue, the conclusion of this one surprisingly suggests another passing of the baton.

For now, though, Collins returns as Brandon Becket, a military sharpshooter just like his old man, Thomas (Berenger). He's on vacation when we first meet him, but it's cut short when he's framed for the assassination of a foreign president. Hunted by both the CIA and a mysterious female assassin (Sayaka Akimoto), Brandon seeks-out help from Dad, now retired and living in a fortified cabin in the woods. Meanwhile, agent “Zero” Rosenberg (Ryan Robbins) is trying to uncover who's really behind the assassination.

Assassin's End is serviceable budget-conscious action fodder. A bit more plodding and less violent than the previous installment (Sniper: Ultimate Kill), the film still has its moments, one particular highlight being a tension-filled, three-way sniper-stand-off, which sort of reminded me of the climax in The Good, the Bad and the Ugly. Once again, Collins is decent-but-unremarkable in the lead role, while Berenger is mostly on-hand for franchise continuity. Conversely, Akimoto throws a lot of zeal into her character, amusingly known as Lady Death and decked-out in standard-issue skin-tight leather required for all female assassins.

In the unofficial race to crank-out the most direct-too-video sequels no one asked for, the Sniper franchise has an edge over such low-watt fare as The Marine. And fortunately, newcomers can join the party any time, since prior knowledge of the other films isn't really a prerequisite. Like the others, Sniper: Assassin's End isn't especially memorable, but there's enough action and implausible fun to maintain interest on a dull evening. The door is left open for a sequel, of course, but also hints the series is ready to move on from the Becket family.