Mr. Biscuits' ADVENTURES IN THE BUDGET BIN: The Mystery of the Disappearing Potato Skins

Dollar Tree is the only place in town that carries TGI Friday's Potato Skins. The restaurant itself may be an endangered species, but my local local Dollar Tree is always packed with these strangely-addictive craptastic crunchies. The downside is my kids like them, too. The last time I brought some home, they asked for a few...then proceeded to POLISH OFF THE WHOLE FUCKING BAG! Perhaps they were just looking out for my health, but the fact remains I didn't get a single fucking chip.

But my trip wasn't a total loss. In addition to grabbing some gum to counter the rancid coffee breath I kept blowing into my own face mask, I found a DVD copy of a film I'd been seeking for a long time...

VIRUS (DVD) – This 1980 Japanese-produced global disaster movie has an interesting history. The original cut runs 155 minutes, while the US cut – running 108 min – is sloppily butchered in an effort to boost the screen time of the Americans in the cast. I still haven't been able to find the original version on DVD or Blu-ray, but for $1.00 at DOLLAR TREE, the edited version will do just fine. It may have been the most expensive Japanese film ever made at the time, but it sure as hell ain't a classic. Still, it's kind of timely right now, especially early scenes depicting dumbasses in denial. 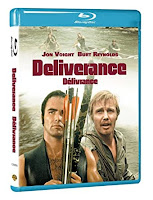 DELIVERANCE (Blu-ray) – Everything I know about hillbillies I learned from Deliverance, and so far, I've yet to hear any examples which contradict my opinion. All that's missing from the film's depiction of hillbillies as backwoods butt-fuckers are curtains made from confederate flags. A bonafide classic, this is the film that taught us to fear banjo music, demonstrated Ned Beatty's extreme dedication to his craft and featured Burt Reynolds when he was still taken relatively seriously as an actor. ($5.99 at BEST BUY) 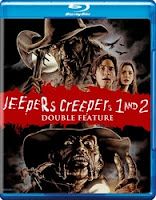 JEEPERS CREEPERS 1 & 2 (Blu-ray) – While I like Shout Factory releases, they are generally overpriced and I'm convinced the company intentionally manufactures demand by limiting the number of copies they produce. It didn't appear to create much demand for the Jeepers Creepers, though, because I found this double feature in a Best Buy budget bin. I dunno...maybe they overestimated how many horror fans wanted a film directed by a guy who was busted for child pornography. While neither film is terrible, they sure as hell ain't worth what they're fetching individually on Amazon. But $5.99 at BEST BUY makes it a bit easier to overlook Victor Salva's repugnant proclivities.
Posted by D.M. Anderson at 1:56 PM