THE PAINTED BIRD: Curse the Beasts and the Children 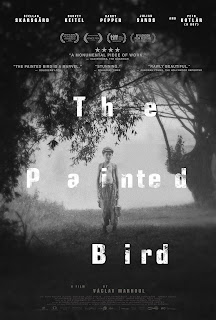 The metaphor of the title may not be subtle, but it's effective. About a third of the way into this Czechoslovakian film, a bird keeper paints the wings of one of his animals. After releasing it, the bird ascends to join a flock hovering above them. The flock then proceeds to attack and kill it.

That bird represents the young boy (Petr Kotlar) who just watched it die. He's a WWII-era Jew whose parents left him with his aunt for his own safety. When she unexpectedly dies, he's on his own to begin a long, terrifying journey through war-ravaged Europe. Along the way, he's seldom treated as human by the adults he meets, most of whom vilify, exploit and abuse him (verbally, physically & sexually). He also witnesses a variety of atrocities inflicted upon others, from animals to town whores to entire villages raided by Cossacks.

Speaking of animals, The Painted Bird opens with a scene of the boy running through the woods clutching a pet ferret. Some other kids catch him, beat him bloody and set fire to the animal. In fact, a lot of animals meet a violent demise throughout the film, to the point we're fearing for the life of any critter that pops up on-screen, very much like we constantly dread what this poor kid will be forced to endure next. And is he destined to share the same fate as the ostracized bird?

Running a harrowing three hours, The Painted Bird is the most emotionally exhausting Holocaust-related film I've seen since Schindler's List. But instead of mass killings and the redemption of one man, the entire narrative is a single boy's personal experience, which nobody with an ounce of empathy would wish on anyone. Like the animals, he's silent through most of the story, either out of fear or a sense of futility. Only on rare occasion is he treated with compassion by those he meets.

You might have to go back to The Passion of the Christ to find a film that inflicts more misery on a single character. But conversely, The Painted Bird doesn't sensationalize its sometimes-shocking violence and the scenes involving sexual abuse are discreetly handled. Dialogue is generally kept to a minimum, allowing imagery to tell much of the story, which is enhanced by stark, darkly beautiful black & white cinematography. What really holds the film together, however, is young Petr Kotlár, who's in nearly every scene. The entire cast, which includes a smattering of familiar faces, is uniformly excellent, but the performance writer-director Václav Marhoul manages to pull out of this kid is remarkable.

While The Painted Bird tells a compelling story (based on a Jerzy Kosiński novel), it is also relentlessly somber and frequently horrifying. It's the kind of film that leaves the viewer emotionally drained and one most will be content to experience just once. But love it or hate it – I can't imagine much middle ground - nobody is likely to forget it. Animal lovers, however, are advised to look elsewhere.