The Cold War at its Grooviest 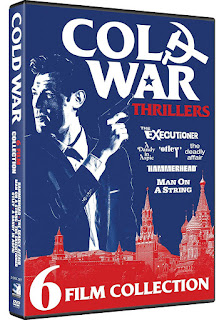 In some ways, so do I. Sure, the Cuban Missile Crisis was kind-of a drag. And yeah, I suppose suspecting your neighbor was a card-carrying communist made for some sleepless nights, as did wondering if you’d someday wake up to find nation’s capital crawling with Khrushchev’s cronies. But, damn, it sure made good entertainment.

For obvious reasons, they don’t make contemporary Cold War thrillers anymore. Any released in the past 30 years have been historically-based, which is fine, but much of the subgenre’s original appeal was its timeliness, like WWII epics that were made & released while the war was still raging. Back in the day, Russians made reliable go-to villains. Because of our inherent distrust in them, authors and filmmakers could quickly establish their bad guy(s) with little effort.


This DVD release collects six relatively obscure films from the golden age of Cold War thrillers. None of them will make anyone forget The Spy Who Came in from the Cold and since most were released during a decidedly “groovier” decade, they are definitely products of their era, sometimes amusingly so. But good or bad, these films provide an interesting retrospective of the genre at the time.

Man on a String and A Dandy in Aspic have the best storylines, the latter getting a considerable boost from Laurence Harvey at his snooty best. I was personally most curious about The Deadly Affair, being that it is directed by Sidney Lumet. However, it’s not one of his better efforts, partially due to the dull narrative and a surprisingly overwrought performance by James Mason. The Executioner has its moments, though it’s clear why George Peppard may have been an A-Teamer, but never an A-lister. Otley is actually a comedy and pretty good as spy spoofs go (there were a lot of ‘em back then).

The real gem, however, might be Hammerhead, which easily the wildest, weirdest and “sexiest,” therefore the most archaic. Playing like a dubious attempt to groom monotonic Vince Edwards into another James Bond, the film has babes, bullets ‘n’ bad guys, along with one of the hippy-dippiest opening sequences you’ll ever see. The film also has a fair amount of humor, both intentional and unintentional.

The transfers for this collection aren’t bad (three films per disc), though it’s obvious we’re talking quantity over quality here. The audio for Hammerhead is kind-of muddy, but overall, the picture and sound is adequate for the price. Classics-none, this is still a fairly decent collection from the grooviest time in Cold War history.