Cloning Around with REPLICAS 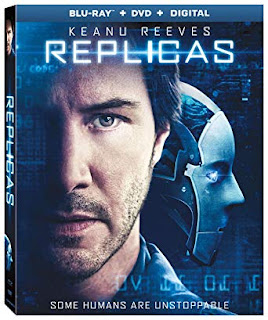 Though it eventually takes some narrative wrong turns and is somewhat hampered by the limitations of its star, Replicas isn’t nearly the dumpster fire some critics have suggested. The basic premise is pretty solid and, for awhile anyway, raises some interesting moral questions.

Keanu Reeves plays William Foster, a brilliant researcher on the verge of transferring human memories into an artificial brain, though so far, his subjects have violently rejected their new robotic bodies. Tragedy strikes one night when his wife and three kids are killed in a car accident. Fortunately – and quite conveniently - his colleague, Ed (Thomas Middleditch), has been experimenting with cloning in the same facility. But unfortunately, he only has three cloning pods, meaning William must choose which family members to resurrect. Poor little Zoe loses out. In the film’s most affecting sequence, William is not-only forced to come-to-grips with losing a child, he has to get rid of all evidence she ever existed, which includes erasing her from the memories of his "new" family.

Naturally, there are complications. Despite attempts to cover his tracks, which includes disposing of his family's old bodies and accounting for their disappearance while the clones are incubating, William is ultimately unable to hide the fact the Fosters are one-kid-short. The dilemma creates some intriguing, occasionally suspenseful scenarios where William’s personal grief clouds his logic. Sure, the viewer is asked to accept some narrative implausibilities, but up to this point, the stage is set for an exploration of the moral – and legal – consequences of his actions. Had Replicas continued down this path, it could have been something special.

Instead, the third act descends into a standard thriller where the Fosters are on the run from those who want to kill them and use William’s scientific breakthrough for more nefarious purposes. The film remains watchable, though grows increasingly far-fetched and predictable...lots of action and a few obligatory twists, but its chosen path is already well-traveled, so the resolution will surprise no one. I also need to take issue with Reeves as the main protagonist. Based on his interviews in the bonus features, Replicas was sort-of a labor of love. While I like Reeves and he certainly isn’t terrible here, I think the emotional desperation required for such a role might be beyond his abilities.

Still, Replicas remains fairly enjoyable, perhaps more so at home, where the viewer is less likely to feel short-changed by the unfortunate decision to dumb things down toward the end. Until then, the film offers-up some interesting ideas, even raising a few moral questions we might feel compelled to ask ourselves if forced to make similar decisions.