FRANKENSTEIN 1970 and the Grand Opening 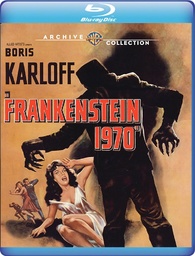 In the opening scene of Frankenstein 1970, a terrified young woman is being pursued through the woods by a murderous monster. After wandering into a pond up to her hips, she stands helplessly and repeatedly screams until the monster eventually catches up and drowns her. If this was any indication of what was in-store, I was in for a phenomenally stupid ride.

Then somebody off-screen yells cut, and it’s revealed to be the set of a horror movie being directed by Douglas Row (Donald Barry). That amusing bit of deception may not seem all that unique today, but back 1958, it was quite a creative way to begin a horror film.

It’d be great if the rest of Frankenstein 1970 lived up to its premise, or was at-least as clever as its opening scene. Disfigured, disgruntled and cash-strapped Victor von Frankenstein (Boris Karloff) grudgingly agrees to let Row’s crew shoot a movie at his famous castle in exchange for an atomic reactor he needs to reanimate a new monster. Since he’s also short a few organs & body parts, his new houseguests come in handy.

Though 1970 was indeed the future at the time this was made, the only futuristic element of the story is Frankenstein’s use of atomic energy to spark his creation to life. Elsewhere, it’s a pretty-much your standard, low-wattage fright flick set in another old castle. Karloff is always enjoyable to watch and has some highly amusing moments hamming it up as the title character. However, there are also too many scenes featuring the film crew that feel like they exist to pad out the running time.

Considering the obvious low budget, Frankenstein 1970 is competently made and a passable time killer. But with the exception of that creatively deceptive opening scene, it isn’t all that memorable. As an interesting side-note, however, Howard W. Koch would soon abandon the director’s chair to achieve considerable success as the producer of such classics as The Manchurian Candidate, The Odd Couple and Airplane. A wise decision from which we've all benefited.

NOT BAD, THOUGH HARDLY ESSENTIAL.
Posted by D.M. Anderson at 9:26 PM