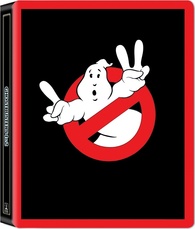 Celebrate the 35th Anniversary of GHOSTBUSTERS on 4K June 11
Steelbook with GHOSTBUSTERS & GHOSTBUSTERS II
GHOSTBUSTERS returns to 4K Ultra HD in an all-new limited edition Steelbook, which also includes the 30th Anniversary edition of GHOSTBUSTERS II. The set includes both films on 4K Ultra HD and Blu-ray, along with an entire additional disc of special features from each film. The films were fully restored from their respective original camera negatives and presented on 4K Ultra HD with HDR and Dolby Atmos audio; the Blu-rays feature HD presentations also sourced from the 4K restorations. The special features disc includes more than two hours of long-requested and rare archival elements—including never-before-seen deleted scenes from the first film—along with returning interviews, effects breakdowns, multi-angle explorations and much more! Both films also feature brand new commentaries, featuring the filmmakers on GHOSTBUSTERS II and passionate fans with deep-cut insights on GHOSTBUSTERS. 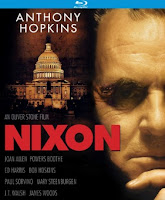 NIXON – SPECIAL EDITION on Blu-ray 5/21
From Oliver Stone, the director of Platoon, JFK and Natural Born Killers. Screen legend Anthony Hopkins (The Silence of the Lambs, Hannibal) electrifies the screen as Richard Nixon, whose chance at greatness was ultimately destroyed by his passion for power. Nominated for four Academy Awards (Actor for Hopkins, Supporting Actress for Joan Allen, Original Screenplay for Stephen J. Rivele, Christopher Wilkinson and Stone, and Score for John Williams), Nixon takes a riveting look at a complex man who became the first American president to resign, due to the threat of impeachment and his involvement in conspiracy jeopardizing the nation's security. The phenomenal all-star cast includes Allen (The Crucible), Powers Boothe (The Emerald Forest), Ed Harris (Needful Things), Bob Hoskins (Shattered), E.G. Marshall (Consenting Adults), Paul Sorvino (I, the Jury), David Hyde Pierce (TV's Frasier), Mary Steenburgen (Hope Springs), J.T. Walsh (Breakdown) and James Woods (The Onion Field). This special three-disc edition includes both the original theatrical cut and the extended director's cut, and is loaded with extras. 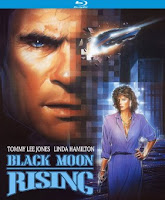 BLACK MOON RISING – SPECIAL EDITION on Blu-ray 5/28
Brand New 2K Restoration of the film from the Original 35mm.
When master thief Sam Quint (Tommy Lee Jones, The Fugitive, Blown Away, The Park Is Mine) is hired by the government to steal top-secret data from a crime organization, he hides the stolen data in the experimental supercar, The Black Moon. But when the car is then stolen by high-tech auto thief Nina (Linda Hamilton, The Terminator), Quint must pull off the most daring heist of all: break into an impenetrable skyscraper and steal it back. With time running out and all sides closing in, Quint and Nina take The Black Moon on one final ride towards a shattering climax of sky-high suspense. Screenplay by legendary filmmaker John Carpenter (Escape from New York), Desmond Nakano (American Me) and William Gray (An Eye for an Eye), from a story by Carpenter. The all-star cast includes Robert Vaughn (Bullitt), Richard Jaeckel (The Dirty Dozen). Loaded with extras, including interviews, audio commentary, alternative scenes and a vintage documentary featuring behind-the-scenes footage and cast & crew interviews.
Posted by D.M. Anderson at 1:09 PM