MISSION OF HONOR...and a Bit of Payback 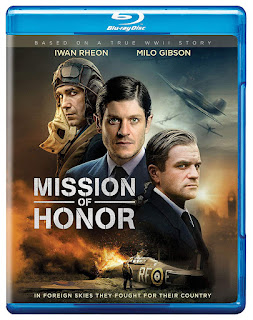 The 303 Squadron was a group of Polish fighter pilots who flew for the RAF during World War II. At the time, the British were regularly getting their asses handed to them by the Germans, but these unruly allies helped turn things around, eventually shooting down more enemy planes than any other squadron in the RAF.

Mission of Honor was originally called Hurricane, named after the type of aircraft they flew and a more accurate title. Mostly presented from the perspective of hot-shot pilot Jan Zumbach (Iwan Rheon), the Polish pilots are more motivated by revenge than anything resembling honor or loyalty. In fact, most of them appear to resent the British, and for good reason. With the exception of Canadian pilot Captain Kent (Milo Gibson, Mel’s kid), the 303 are regarded pretty contemptuously by their superiors. However, payback for what the Nazis did to Poland and its people is what drives them.

It’s an interesting chapter in history, probably one worthy of a bigger, more ambitiously sweeping film than this. Mission of Honor is watchable, but ultimately hampered by budget-conscious production and a frustratingly episodic narrative that quickly establishes a repetitious pattern: exposition, battle sequence, pilots partying, repeat. There’s nothing necessarily wrong with that, but whether it's dramatic conflict or an aerial battle, many scenes abruptly end before fully playing themselves out. With the exception of the climax, no missions are shown in their entirety, and while the performances are decent, none of these characters are that interesting when they’re out of the cockpit.

But despite its narrative and budgetary shortcomings – the latter reflected by some questionable CGI – Mission of Honor comes across as being historically accurate. Whether or not it actually is I’ll leave for experts to debate. But the technical and strategic aspects of the film feel authentic, which might be more than enough for history buffs to enjoy.

So while we may not learn all that much about those who fought – and sometimes died – in these tide-turning skirmishes, Mission of Honor makes an admirable attempt to tell their story. The result is a mildly engaging time killer, but the whole thing would have benefited greatly from a heftier budget and a more cohesive script.