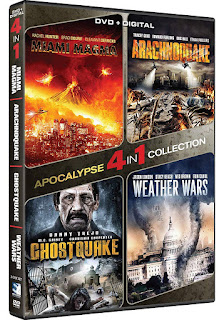 The title of this 2-disc DVD collection is a bit misleading. None of the four films feature stories of impending global doom. In fact, only a couple could loosely be considered disaster movies.

It also bares mentioning that all of them originally premiered on SyFy. Anyone familiar with the channel’s brand of budget-conscious catastrophe knows exactly what to expect: outlandish plots, bargain basement CGI and lead actors whose celebrity status is one step away from appearing on Dancing with the Stars. And I’m guessing anyone who’s read this far is probably okay with that.

Predating Sharknado by a year, Arachnoquake is exactly what you think it is. Still, this one is the best of the lot because it’s mostly played for laughs. That doesn’t mean it’s always funny, but there’s an occasional good gag here and there. Additionally, it features former child stars Tracey Gold & Edward Furlong, the latter of whom looks and sounds completely shitfaced. Sharing the disc is Ghostquake, which is actually more of a horror movie. Though not remotely scary, it’s at-least watchable and there are a couple of decent death scenes. Besides...who doesn’t love Danny Trejo?

While Weather Wars and Miami Magma might qualify as disaster movies, only the former is worth sitting through, mainly because Stacy Keach engages in some serious scenery chewing as an unhinged evil genius who manipulates the weather to exact revenge on a senator who once poo-pooed his research. The premise is ridiculous, but relatively speaking, the special effects aren’t half bad. The same can’t be said for Miami Magma, by-far the worst of the four. The plot, dialogue, logic, pacing and CGI are uniformly awful, even by SyFy standards. As for the cast, what more can be said about a movie where Rachel Hunter turns in the best performance? On the plus side, it does include an unexpected death by a flaming tennis ball.

But hey, they can’t all be zingers, which is par for the course with collections like this. Arachnoquake has enough moments as amusing as Sharknado to make it worth seeing more than once. As for the rest...well, we ain’t exactly talking Roland Emmerich, but if you enjoy cheese as part of your disaster diet, dig in.