Blu-ray Giveaway: HOW TO TRAIN YOUR DRAGON - THE HIDDEN WORLD 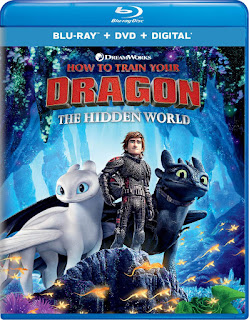 FREE KITTENS MOVIE GUIDE is giving away a Blu-ray copy of DreamWorks' HOW TO TRAIN YOUR DRAGON: THE HIDDEN WORLD to one lucky reader.

Features over an hour of exclusive behind-the-scenes bonus content including an alternate opening, two DreamWorks animated shorts, deleted scenes and more. To mark the film’s global 4K Ultra HD, Blu-ray and DVD release, Universal has partnered with Facebook and Messenger to debut two exclusive adorable Night Lights (baby dragons) to train and an awe-inspiring in-store Augmented Reality (AR) experience. In pack, fans can unlock an exclusive code that reveals your very own Night Light that you can hatch, train, and send on adventures within the popular Dragon Pets Instant Game available on Facebook and Messenger. Additionally, participating retailers around the world will unveil in-store displays that trigger a visually stunning AR adventure bringing Toothless and Light Fury to flight! Both the in-home and in-store experiences are compatible with iOS and Android devices, and users should download the latest version of the Facebook and Messenger apps.

TO ENTER: Simply drop us a message at freekittensmovieguide@gmail.com.
CONTEST ENDS 5/20.
Posted by D.M. Anderson at 4:30 PM