A Curmudgeon’s Guide to THE KID WHO WOULD BE KING 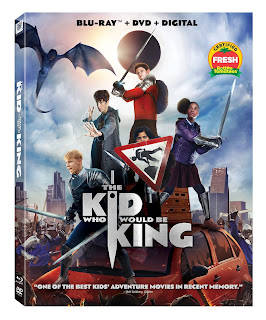 I hate using the term, “They don’t make ‘em like this anymore,” a phrase mostly used by grumpy old curmudgeons to express their contempt for anything with mass appeal to generations other than their own. I suppose I am a grumpy old curmudgeon in some ways. Sorry kids, but your music sucks. The latest Metallica album, though? Man, they don’t make ‘em like that anymore.

But while that adage kept popping into my mind while watching The Kid Who Would Be King, it wasn’t out of longing for the good ol’ days. But in point of fact, the film is quite unlike what generally passes for family entertainment these days. It isn’t animated, nor is it based on a book series, comics character, video game or line of toys. There’s no questionable language, scatological gags, overt slapstick or any other pandering attempt to garner giggles. Though it’s often quite funny, the film earns its laughs through the characters’ interactions and the situations the story puts them in.

Updating the Arthurian legend with modern kids is a great concept. Writer-director Joe Cornish wisely opts to create a straightforward fantasy-adventure, cleverly acknowledging the more familiar elements of King Arthur’s tale while spinning a fresh story of his own. After drawing Arthur’s sword, Excalibur, from a stone at a construction site, 12-year-old Alex (Louis Ashbourne Serkis...yeah, Andy’s kid) is tasked to stop Arthur’s evil half-sister, Morgana, from returning to wreak havoc on the world. After Merlin (Angus Imrie) arrives to gravely inform him what’s at stake, Alex must recruit both friends and enemies to aid him on his journey, which will take them across England.

Despite running two full hours, the film is consistently engaging and fun, with believable characters performed by an able young cast. Though Patrick Stewart shows up as an older version of Merlin and Rebecca Ferguson plays Morgana, the rest of the adults are peripheral characters. Even Merlin is primarily presented as a 16-year-old who assists and advises Alex and his “knights” in their quest to thwart Morgana. None of the characters come across as composites or broadly-drawn caricatures. Even the two bullies of the film are pretty well-rounded.

Though the film starts a little slow, once things get rolling and they begin their quest, The Kid Who Would Be King is a rousing adventure with some great action sequences bolstered by imaginative special effects (Morgana’s army of demons is particularly impressive). The climactic battle at the kids’ school is genuinely thrilling and often pretty damn funny. Like all family films, there’s an underlying message, of course, and considering the tumultuous state of the world right now, the one presented here couldn’t be more timely. A lot of adults could stand to be reminded of it, too.

Best of all, there isn’t a cynical moment in the entire film. Despite the title – a play on Kipling’s unrelated novel – this isn’t so-much a kiddie flick as it is an epic adventure that just happens to be suitable for the entire family. It’s a damn shame we live in a world where this tanks at the box office while The Emoji Movie rakes in millions (oops...I’m letting the curmudgeon in me show again). On the other hand, Willy Wonka and The Iron Giant were initially bombs and now everybody loves them. Maybe The Kid Who Would Be King can find the audience it deserves on home video, too, or else they might not make ‘em like this anymore. Highly recommended for everybody.

MEE-OW! LIKE TAUNTING A MOUSE TO DEATH.
Posted by D.M. Anderson at 9:47 PM