THE GREAT BUSTER is a Fitting Tribute 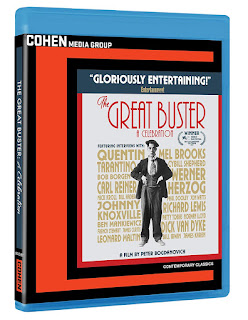 The film’s full title is The Great Buster: A Celebration, which is fitting. The problem? It leaves you wanting more.

It’s another great documentary by Peter Bogdanovich, who also chronicled Tom Petty’s career in the epic-length Runnin’ Down a Dream. Since both are arguably the best films he’s directed in at least 30 years, perhaps he should just stick to documentaries for awhile.

Bogdanovich’s approach and structure – not-to-mention his own affectionate narration – does indeed celebrate the life, career and enduring influence of Buster Keaton. The biographical first half is loaded with restored clips from the classic two-reelers where he first found stardom, along with on-screen commentary by dozens of actors, directors, historians and comedians, whose admiration and respect for Keaton is clearly genuine.

The second half focuses exclusively on the ten feature-length films he directed and starred-in from 1923 to 1928 (widely considered his glory years). Celebrity testimonials give-way to lengthy segments in which Bogdanovich himself celebrates each of those films with insightful observations and no-small-amount of gushing praise. Keaton’s most famous bits are showed in their entirety, most of which are still very funny even when presented out of context. I’ll be upfront and admit I’m not too well-versed in silent comedy, so a lot of this was revelatory and one thing becomes quickly obvious: Filmmakers and comics have been ripping-off Keaton’s moves for decades.

Ultimately, what The Great Buster does best is inspire the viewer to experience Keaton’s films themselves. Peter Bogdanovich has assembled an entertaining tribute that might actually appeal more to newcomers than those familiar with comic’s work. The clips themselves have been wonderfully restored, and since Cohen Media Group founder Charles Cohen boasts in a bonus supplement that he’s acquired most of the Keaton filmography, one can only hope we’ll someday see 4K transfers The General and The Navigator. Until then, this charming retrospective will do nicely.

EXTRA KIBBLES
“CONVERSATIONS FROM THE QUAD” - A half-hour discussion/interview with Bogdanovich, with an intro by Charles Cohen.
TRAILER
KITTY CONSENSUS:

MEE-OW! LIKE BEING TURNED LOOSE IN A BIRD SANCTUARY
Posted by D.M. Anderson at 8:44 PM