LORDS OF CHAOS on Blu-ray & DVD 5/28
Oslo, 1987: Seventeen-year-old Euronymous (Rory Culkin) is determined to escape his idyllic Scandinavian hometown and create "true Norwegian black metal" with his band, MAYHEM. He's joined by equally fanatical youths - Dead (Jack Kilmer) and Varg (Emory Cohen). Believing that they're on the cusp of a musical revolution, the group gets even darker, driven by the black metal dogma to spread evil. They begin burning down churches throughout the countryside and stealing tombstones for their record store. But when the press catches up with them and Euronymous takes more credit than he's earned for the group's violent acts, Varg, fresh out of jail, arranges a dark encounter to settle the score and ultimately determine who the darkest black metal musician is. Inspired by a true story, Lords Of Chaos made its debut at the 2018 Sundance Film Festival before going on to impress audiences at Fantastic Fest, Beyond Fest, Fantasia Festival, and more. 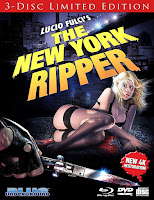 THE NEW YORK RIPPER Limited Edition 3 Disc Set Coming 6/25
A blade-wielding psychopath is on the loose, turning The Big Apple bright red with the blood of beautiful young women. As NYPD detective Fred Williams (Jack Hedley of For Your Eyes Only) follows the trail of butchery from the decks of the Staten Island Ferry to the sex shows of Times Square, each brutal murder becomes a sadistic taunt. In the city that never sleeps, the hunt is on for the killer that can't be stopped! Co-written and directed by acclaimed horror maestro Lucio Fulci (Zombie, City Of the Living Dead) and filmed on location in the mean streets of New York City, this is one of Fulci's most savage and controversial thrillers. Now Blue Underground is proud to present The New York Ripper in a new 4K restoration from its original camera negative, completely uncut and uncensored, and fully loaded with exclusive new extras.

LEPRECHAUN RETURNS on Blu-ray and DVD 6/11
The devious and deadly wisecracking Leprechaun that we all know (and love to hate) returns to reclaim his pot of gold from a sorority house property…all while gleefully going on a Leprechaun-style killing spree. Leprechaun Returns stars Linden Porco as The Leprechaun with his signature hat and shiny shoes, Taylor Spreitler, and Mark Holton, who returns to the series for the first time since the original 1993 film. The Leprechaun Returns Blu-ray and DVD will include a making-of featurette, behind-the-scenes footage and still gallery.


A VIGILANTE on Blu-ray Combo Pack, DVD and Digital 5/28
Give her a call, and she’ll give you justice. After escaping her violent husband, Sadie (Olivia Wilde) makes it her life’s mission to help free others in danger. Now, after months of rigorous training in survival skills, boxing, and lethal martial arts, Sadie is back with a vengeance in this fight-packed action-thriller. Experience Olivia Wilde’s incredible, critically acclaimed performance in the riveting, genre-bending thriller A Vigilante, arriving on Blu-ray Combo Pack (plus DVD and Digital), DVD, and Digital May 28 from Lionsgate. This film is currently available On Demand. “Olivia Wilde is positively brilliant” (Entertainment Weekly) as an avenger who lives to defend victims of domestic abuse in this electrifying, fight-packed action-thriller. The A Vigilante Blu-ray Combo Pack and DVD will include a never-before-seen making-of featurette

CLIMAX on Blu-ray and DVD May 28
Another truly unique and sensual vision from filmmaker Gaspar Noé. Rotten Tomatoes Certified Fresh, this hypnotic and provocative horror film centers on a troupe of younger dancers who, while rehearsing in an empty school building, learn their sangria is laced with LSD and descend into a passionate and violent delirium. Stirring up buzz upon its premiere at the 2018 Cannes Film Festival, the film is “a sensual overload that will have your heart pounding” (Joseph Walsh, Time Out New York) and features rising star Sofia Boutella, Romain Guillermic, Souheila Yacoub, and Claude Gajan Maull. The Climax Blu-ray and DVD include a never-before-seen making-of featurette.
Posted by D.M. Anderson at 11:55 AM