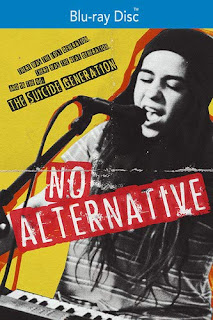 I remember when Kurt Cobain died. I was in college and a bit older than many of my classmates (having partied through most of my 20s). So while his suicide didn’t have a profound impact on my life, I did observe how it affected a generation touched by his songs. That, coupled with the overall bleakness of grunge music itself, galvanized the stereotype of 90s’ youth as moody, ambivalent naval-gazers.

No Alternative revels in that decade, as experienced through two disaffected suburban siblings in the post-Cobain era. Bridget (Michaela Cavazos) is a brooding, perpetually angry high-schooler who’s been prescribed a variety of medications since she was eight. Her older brother, Thomas (Conor Proft), initially appears to be the more responsible of the two. Their parents (Harry Hamlin, Kathryn Erbe) expect Thomas to go to college, though all he really wants is to play with his band of Nirvana wannabes.

The film itself is nearly plotless, primarily shifting back and forth between Bridget and Thomas. Mom and Dad are mostly peripheral figures in their daily lives (and the story, though Dad is arguably its de-facto antagonist). Neither kid is particularly likable, but as products of their environment – or in Bridget’s case, no-small-amount of medication – each manages to generate fair amounts of empathy. Both find emotional outlets through music. Bridget embraces rap, which suits her confrontational nature. Through cringeworthy scenes during open-mike night at a local club, her performances are similar to scream therapy. However, as the narrative unfolds, it’s Thomas whose behavior and actions take alarming turns.

As authentic as everything looks, sounds and feels, No Alternative is not a nostalgic trip down memory lane. The film is as cheerless as the music from the era, especially its depiction of how mental illness can go tragically unnoticed until it’s too late. Writer-director William Dickerson adapted his own novel, a fictionalized recollection of his own youth and equally troubled sister. The result isn’t what anyone would call a good time at the movies, but by the time we realize the entire film will be an exercise in misery, we feel compelled to see it through, even once we’re certain not every character will make it out alive.

No Alternative is the type of movie where we admire the message, the performances and the director's integrity, which isn’t the same as actually enjoying it. Dickerson doesn’t pull any emotional punches and the film grows increasingly tough to watch as the story approaches its inevitable-with-hindsight conclusion. However, those who vividly recall the '90s will feel like they've unearthed a time capsule.