A Tour of THE COOLEST GUY MOVIE EVER 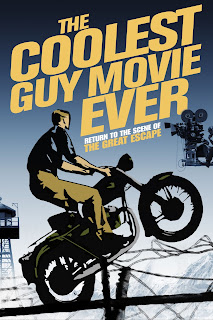 Is The Great Escape truly the "coolest guy movie ever"? That's debatable, of course (Personally, I'd throw-in with The Good, the Bad and the Ugly). It's certainly one of the greatest war films ever made, though. Oddly enough, this documentary doesn't actually argue the claim of its title, and was obviously made for those who already agree.

A Coolest Guy Movie Ever isn't really a making-of documentary, either, though we do get some production details from surviving cast & crew members. The majority of the film is a tour of the various German locations where The Great Escape was made. Some of the structures (such as the set of the POW camp) are gone, but a surprising number of them are still standing, looking very much like they did during filming.


Many of the locals are interviewed, some who interacted with the likes of Steve McQueen and Charles Bronson. Speaking of the cast, the film includes vintage interviews with a few of its late stars - such as James Garner and James Coburn - as well as some that are still with us, all of whom share anecdotes about shooting in these locations. The whole thing is narrated by actor Lawrence Montaigne, who squared-off on-screen with Coburn to distract the prison guards (sadly, Montaigne also passed away last year).

At only 58 minutes, The Coolest Guy Movie Ever might have made a better bonus feature on some future Blu-ray re-release of The Great Escape itself. But as it is, the film is an obvious labor of love by everyone involved. Those who agree with the title should really enjoy it, particularly if you can't afford to hop a plane to Germany to visit these locations.