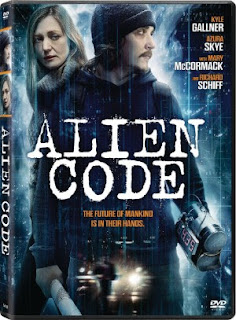 Alien Code doesn't deserve its title. Not only does it totally spoil one of the film's more intriguing surprises, it sounds like some sort of History Channel mockumentary. The movie is better than that. Smarter, too.

Kyle Gallner (if there's ever a Metallica biopic, he's a shoe-in to play Lars Ulrich) is Alex, a cash-strapped computer cryptologist who comes home to discover a corpse on the floor...his own. It's the first part of a labyrinthine puzzle which the movie dishes out one piece at a time.

The nutshell plot has Alex recruited by a shady organization to decipher a complex code embedded in a retrieved satellite, which they think is from the future. Alex discovers, however, that it is alien in origin. Not only that, the code consists of partial blueprints for some sort of apocalyptic weapon. The agency dismisses Alex before he can complete the entire code. He also develops a fatal brain tumor that allows him to see these aliens...faceless, suited men who exist in a different temporal dimension (or something like that). With time running out - not-to-mention becoming increasingly warped - Alex tries to stop the weapon from being used, with help from Beth (Azura Skye), the previous cryptologist who worked on the code (and who also has a brain tumor).

The overall narrative is far more complex than that, with a strange new twist thrown in every few minutes or so. Part of the fun is watching how these plot points are linked and eventually converge. The film doesn't sustain its unique premise all the way to the finish and sometimes threatens to collapse under the weight of its own lofty ideas (often at the expense of any real character development). But for the most part, it's enjoyably perplexing, coming to a logical - if inevitable - conclusion.

Despite a deceptively stupid title, Alien Code is a decent example of intelligent science-fiction on a limited budget. Free of any flash or spectacle, the film is driven entirely by its ideas, which are certainly interesting enough to warrant checking-out a time or two.