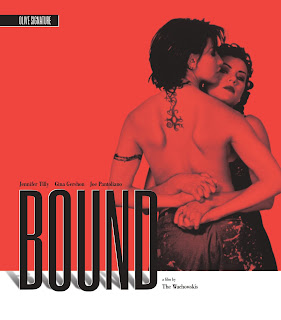 Once upon a time, Lana & Lily Wachowski were simply great storytellers...

Like most people, my introduction to the directing duo was The Matrix. Not only was it visually groundbreaking for the time, the story itself was full of thought-provoking ideas that were conceptually intriguing. For me, the Wachowskis represented the new sci-fi vanguard and The Matrix was a harbinger of greater things to come.

But, alas, greater things never came. Beginning with Matrix sequels, subsequent Wachowski films grew bigger and more bombastic, their narratives taking a backseat to special effects and disorienting action. Interestingly, I found a Blu-ray of their last film, Jupiter Ascending, for only three bucks at Big Lots on the same day the Olive Signature Edition of their very first film, Bound, arrived in the mail for review. Watching them back-to-back was a depressing reminder of how much the Wachowskis have succumbed to their own ambitions over time.

Superficially, Bound is unlike anything in else in their filmography. In 1996, you'd have to be a psychic to connect the dots between this film and their next (The Matrix). Not only does it provide a stylish spin on a completely different genre, Bound is relatively small compared to the Wachowskis' later epics, driven by a fiendishly-clever story and vivid characters. With 20/20 hindsight, though, one can notice many of the creative stylistic touches that would serve the Wachowskis well in later films.

In typical neo-noir fashion, Bound has a pair of lovers hatching a risky plot to abscond with ill-gotten money from a dangerous antagonist. The twist, however, is that the protagonists are both women. Corky (Gina Gershon) is an ex-con making ends meet by painting and repairing an apartment. Violet (Jennifer Tilly) lives next door with mid-level gangster Caesar (Joe Pantoliano). Not only does Violet want out of the mob life, she's attracted to Corky. The feeling turns out to be mutual, and not long after consummating their relationship, the two come up with an intricate plan to steal a suitcase full of mob money, scheduled to be picked up by Caesar's boss.

Ultimately, Bound is an exceptional directorial debut and arguably the Wachowskis' second-best film. Bereft of the bells and whistles they'd later come to depend on, it tells a compelling story with little more than a smart screenplay, a bit of dazzling camerawork and a perfect cast. Watching Jupiter Ascending immediately afterwards was another sad reminder that maybe these two directors would be better off without bottomless budgets and visual fireworks.

EXTRA KIBBLES
UNRATED VERSION OF THE FILM
NEW FEATURETTES - "The Difference Between You and Me" (a twenty minute featurette about neo-noir as it relates to Bound).
FEATURETTES (from the 2014 UK Blu-ray release) - "Modern Noir: The Sights and Sounds of Bound"
NEW INTERVIEW - "Part and Parcel" (with title designer Patti Podesta).
INTERVIEWS (from the 2014 UK Blu-ray release) - "Femme Fatales" (Gina Gershon & Jennifer Tilly); "Here's Johnny!" (Christopher Meloni). Though listed on the cover, an interview with Joe Pantoliano is not included.
AUDIO COMMENTARY (from the 2014 UK Blu-ray release) - With the Wachowskis, editor Zach Staenberg, sex consultant Susie Bright, Gina Gershon, Jennifer Tilly, Joe Pantoliano.
ESSAY: "WE KNOW HOW THIS ENDS" - Booklet and video text versions, written by Guinevere Turner.
TRAILER
KITTY CONSENSUS:

MEE-OW! LIKE TAUNTING A MOUSE TO DEATH
Posted by D.M. Anderson at 7:15 PM