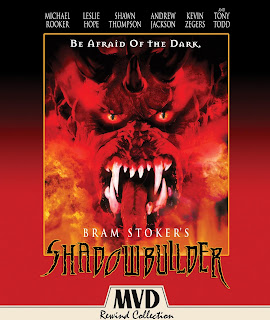 In Shadowbuilder's first scene, cult hero Michael Rooker discovers naked sacrificial bodies in a cellar. In the room above, several robed zealots, led by an evil bishop, are conducting some sort of demon-resurrecting ritual. Just as all hell breaks loose - no pun intended - Rooker's character bursts in, guns blazing, and blows everybody away. As he's standing among the carnage, he dons a clergy collar.

Of course, Father Vassey (Rooker) is too late to stop the title creature, which escapes and heads to the small town of Grand River, seeking out a young boy, Chris (Kevin Zegers), whose soul will apparently make it invincible. Along the way, the Shadowbuilder gains strength by turning other victims into physical shadows who tend to explode when exposed to light. Vassey teams with the sheriff (Shawn Thompson), the kid's aunt (leslie Hope) and the town's local loony (Tony Todd) to try and save Chris. Meanwhile, everyone else in town becomes possessed, prompting one to question why the Shadowbuilder actually needs this kid. Any demon capable to making an entire population do its bidding seems powerful enough already.

But never mind. We don't watch scrappy little horror films like Shadowbuilder expecting another Exorcist. Nor do we expect anything resembling the Bram Stoker story it's supposedly based on (his name is included in the full title for brand name recognition, but you knew that already). What we expect are a few gruesome deaths, some good scares and a story that doesn't insult our intelligence. In that respect, Shadowbuilder is hit-or-miss.

Rooker is awesome, of course, going all-in with as much intensity as he can muster. The other horror icon in the cast, Tony Todd, is also a lot of fun, providing a majority of the film's comic relief. Elsewhere, the performances are merely serviceable and we don't really care about their characters. Shadowbuilder features a few nifty sequences, though it seldom rises above mildly creepy and is occasionally undone by inconsistent special effects, mostly involving the murky-looking title creature. Speaking of which, I think giving it a voice was a creative mistake. At no point does it say anything vital to the narrative, and hearing it speak tends to deflate some of the dread the film tries to build.

But for the most part, Shadowbuilder is fast-paced and well made for its budget. Far from the most original thing ever thrown together, it's entertaining in the moment. And it goes without saying that fans of Rooker and Todd should really enjoy this, since they're easily the best part of the movie.

One major issue with this Blu-ray transfer: There are numerous scenes where the picture quality is absolutely terrible - I mean distractingly grainy - which is surprising. Most films in the MVD Rewind Collection have great transfers. However, this discs packs in the usual generous batch of bonus features.