THE NIGHTMARE BEFORE CHRISTMAS 25th Anniversary Edition on Digital and Blu-ray Sept. 2 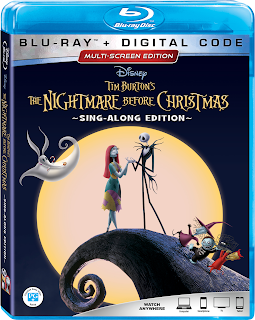 Tim Burton’s “The Nightmare Before Christmas,” the stop-motion animated musical-fantasy following Pumpkin King Jack Skellington’s misguided mission to make Yuletide his own, was hailed as a macabre masterpiece when it debuted in 1993 and holds a 95% critics rating on Rotten Tomatoes. Twenty-five years later, fans can relive the merry misadventure—and sing or shriek along in brand-new sing-along mode—with the 25th Anniversary Edition of “The Nightmare Before Christmas.” Viewers can get their spook on instantly via Digital, Movies Anywhere and on Blu-ray Sept. 2.

The new edition audiences to experience “The Nightmare Before Christmas” two different ways: the original, full-length film, in which the holidays collide with chaotic and comical consequences, and all-new sing-along mode, which includes pop-up lyrics to 11 unforgettable songs like “What’s This” and “This Is Halloween.” The Multi-Screen Edition of “The Nightmare Before Christmas” includes a Blu-ray and Digital Code giving viewers the flexibility to watch the film on different devices.
Posted by D.M. Anderson at 10:19 AM