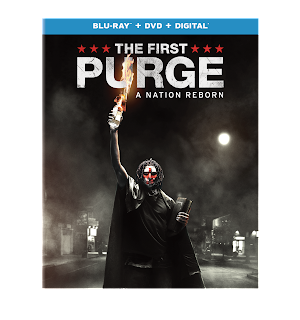 The origin story to the worldwide phenomenon that redefined horror, THE FIRST PURGE, the fourth chapter in the thrilling franchise, arrives on Digital and the digital movie app MOVIES ANYWHERE on September 18, 2018 and on 4K Ultra HD, Blu-ray™, DVD and On Demand on October 2, 2018 from Universal Pictures Home Entertainment. When the New Founding Fathers of America look to push the crime rate below one percent for the rest of the year, a radical sociological theory that vents aggression is tested among an isolated community. But once the violence of oppressors clashes with the rage of the marginalized, the contagion of the experiment explodes and rapidly spreads, leading to a revolution. THE FIRST PURGE takes audiences back to where the nightmare all began in this timely and relevant horror-thriller, including gripping bonus features appealing to fans of the franchise.


The Purge 4-Movie Collection will also be available on Digital September 18, 2018 and Blu-Ray and DVD on October 2, 2018. New and longtime fans can be welcomed to an America where all crimes are legal for one night a year in one must-own set including The Purge, The Purge: Anarchy, The Purge: Election Year, and the prequel The First Purge, an explosive series of pulse-pounding thrillers where anyone can get away with murder!