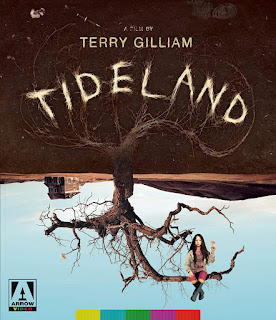 Anyone familiar with Terry Gilliam already knows he doesn't give a damn about you, me or the expectations of any major studio stupid enough to trust him with their millions. Even his most commercial films reflect a considerable amount of self-indulgence, and it's often pretty apparent he's his own biggest fan. That's not meant as criticism. Gilliam's films have a look and tone like no other - including those that were accidental mainstream hits - the work of a director who's wired differently than the rest of us.

But even by Gilliam's standards, Tideland is really out there.

Jeliza-Rose (Jodelle Ferland) is a little girl whose active imagination helps her cope with the world's worst parents. When we first meet her, she's living in squalor, cooking a heroin fix for dad, Noah (Jeff Bridges), a has-been musician. Her mother (Jennifer Tilly) is arguably worse, not only a junkie herself, but verbally abusive. After Mom dies from a methadone overdose, Noah and Jeliza take a bus to his childhood home, an abandoned and dilapidated old farmhouse in the middle of nowhere. When Noah also OD's and dies, Jeliza is alone.

She retreats from reality into her own fantasy world with dolls' heads as companions, eventually meeting her eccentric neighbors, Dell (Janet McTeer), who Jeliza first-believes is a ghost or witch, and Dickens (Brendan Fletcher), her mentally impaired son. Meanwhile, Noah's corpse becomes bloated and rotten. For most of the film, we aren't sure if Dell & Dickens are figments of Jeliza's active imagination, especially once Dell uses her taxidermy skills to preserve Noah. And the uneasy relationship between these three is just getting started.

Not only is Tideland Gilliam's strangest film, it's also his bleakest. Despite 'whimsical' sequences of Jeliza and Dickens at-play in her fantasy world, it is unremittingly dark, becoming increasingly disturbing by introducing sexual overtones. Yet at the same time, this is Gilliam at his most rambling and self-indulgent. Despite offering up heaping helpings of his patented weirdness, the narrative often feels episodic and directionless. It's a good bet that anyone not 100% in-sync with Gilliam's sensibilities will run out of patience - and tolerance - long before the end credits roll. It's almost as if he's daring people to actually enjoy it.

Some will, though. Tideland is visually arresting (and looks great on this disc). Gilliam's unique flare for surreal imagery and inventive camera angles is here in abundance. Additionally, considering her age, the requirements of her role and how long she's on-screen all by herself, Jennifer Ferland's performance is nothing short of remarkable.

In an introduction included with this Blu-ray release, Gilliam proudly declares viewers will either love it or hate it. I guess we can add 'master of understatement' to his list of talents, because Tideland is easily the most polarizing movie he's ever made. One can't help but think that was his intention all along (sort-of making this his own Natural Born Killers). Available on Blu-ray for the first time, Tideland comes with a lot of interesting supplemental material. None of it was created specifically for this release, but it's always amusing to listen to Gilliam and see how he works.