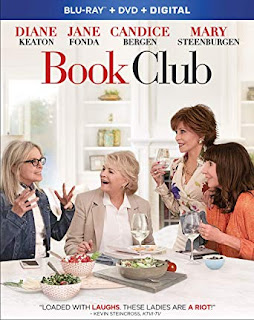 I can't help but harbor some resentment toward E.L. James...or more specifically, her fans. As someone whose own two novels sold a collective 300 copies, it sickens me that they turned this hack's sleazy brand of Momporn - germinating from her self-published Twilight fan fiction - into bestsellers and three inexplicably popular movies.

When I saw the Book Club trailer, the writer in me was incredulous. Just what we needed...a movie about Fifty Shades of Grey, further legitimizing the cultural phenomenon of a writer with far more audacity than talent.

But that's just the pretentious author in me talking. The movie blogger in me is generally intrigued by any movie that can assemble a cast like this, even one that looks like a pandering, high-concept product. I could just hear the pitch for this one: "Chicks love Fifty Shades, so what if we got four respected actresses to swallow their dignity and play old ladies who are inspired by it?"

Those respected actresses are Diane Keaton, Jane Fonda, Candice Bergen and Mary Steenburgen, playing four lifelong friends who meet once a month to discuss a novel chosen by one of them. Vivian (Fonda) selects Fifty Shades of Grey for their next book, which of course means we'll get a montage of their shocked reactions while reading it.

But really, other than some brief segments where Carol (Steenburgen) is inspired to spice up her marriage, Fifty Shades of Grey is simply a plot device. Book Club is mostly about the crossroads these women have reached regarding relationships. Diane (Keaton) is a widow who meets a charming airline pilot (Andy Garcia), while her two grown daughters are convinced she'll die alone if she doesn't move in with them. Sharon (Bergen) is a federal judge who still hasn't gotten over her divorce fifteen years earlier - especially since her ex is about to marry a woman half her age - and lonely enough to try online dating. Carol and Bruce (Craig T. Nelson) are happily married, but their sex life has stagnated since he retired. Vivian has always been fiercely independent, treating men as objects, until the one man she once fell in love with (Don Johnson), re-enters her life.

While there a few laugh-out-loud moments - mostly involving sex and anatomy metaphors - Book Club isn't always particularly funny. It is, however, the kind of congenial movie one watches with a consistent smile on their face, knowing damn well how everything will turn out, yet enjoying the journey anyway. Much of that is due to the cast, who are obviously having fun with their roles (though sometimes it seems like Fonda is trying too hard). There's little in the way of actual conflict, but these characters are likable and their predicaments are engaging.

No one will walk away from Book Club feeling they just viewed a masterpiece. However, it's affably enjoyable and makes the most of its considerable star power. Everyone in the cast have done better films, but their dignity remains intact because the movie isn't the snickering sex farce I feared it would be.