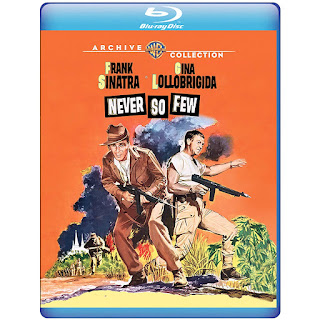 Steve McQueen is the coolest guy who ever lived. It's been scientifically proven and anyone arguing otherwise is probably a Flat-Earther, too. Ever since Mom & Dad brought took me to see Le Mans eons ago, McQueen has been one of my heroes. Whenever one of his old movies showed up on TV or a new one arrived in theaters, I'd be there. While I acknowledge he didn't really have a ton of range, McQueen was always the coolest guy on the screen...and he knew it, which somehow made him even cooler.

But not even Steve McQueen was born cool. He had to learn it somewhere, and I'm certain one of his mentors was director John Sturges. If The Magnificent Seven and The Great Escape is where McQueen graduated to being the King of Cool, then the first film he and Sturges did together, Never So Few, might be considered his training ground.

Frank Sinatra is actually the film's star, playing Tom Reynolds, a maverick captain who commands a eclectic troop of OSS soldiers and Burmese natives during World War II, fighting the Japanese by attacking their outposts. In between raids, he woos a wealthy trader's high society girlfriend, Carla (Gina Lollobrigida). Sinatra's charming and Gina is gorgeous, of course, but their love story is pedestrian and slows the story to a crawl.

However, whenever Reynolds is with his team in the jungle, Never So Few is unpredictable, exciting and often pretty intense (Reynolds shoots one of his own mortally-wounded men because they have no doctor or morphine). Surrounding him is a great cast, including Charles Bronson as a tough-as-nails fighter (of course), Peter Lawford as a reluctantly-recruited doctor, Richard Johnson as Tom's closest friend and a young Dean Jones playing way against type.

But even though he's essentially a peripheral character, McQueen steals every scene he's in. Never So Few isn't his first film, but it is where he's just beginning to hone the persona that would be his bread & butter for the rest of his life. As newly-recruited Corporal Bill Ringa - who Reynolds admires for his brashness - we can catch early glimpses of the devil-may-care "Cooler King," the earnestness of Vin Tanner and even some of Frank Bullitt's unflappability.

So God bless John Sturges for helping Steve McQueen learn how to be Steve McQueen. He's easily the best part of Never So Few and even Sturges knew it at the time, which is probably why they worked together two-and-a-half more times (the 'half' being 1971's Le Mans, which Sturges eventually quit). The movie itself pales in comparison to Sturges' best work, but as a harbinger of things to come, it's quite fascinating.