The Excess of THE US FESTIVAL 1982: THE US GENERATION 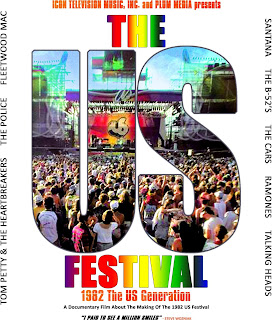 AVAILABLE ON BLU-RAY/DVD FROM
MVD VISUAL

I remember the US Festival being a pretty big deal at the time. Organized and funded by Apple co-founder Steve Wozniak, everything about it was huge...the stage, the manpower, the technology, the hefty sums that artists - some of the world's biggest - were paid. And of course, there was the crowd of nearly a half-million people.

I also remember that it was a financial debacle and Wozniak lost over $12 million on the first concert alone (which is somewhat downplayed in this documentary). Historically, the US Festival was not the cultural milestone that Woodstock became, nor did it briefly unite the world like Live Aid a few years later. The entire event was simply the whim of a billionaire who thought it would be fun. In that respect, the US Festival could be viewed as the touchstone event of a decade that's often defined by excess.

Though there were actually two US Festivals, this film focuses exclusively on how Wozniak - with considerable assistance from others, such as legendary concert promoter Bill Graham - planned and put together the inaugural 1982 event. Even with Wozniak's bottomless checkbook, this was obviously a tremendous undertaking. Through interviews and behind-the-scenes footage, the film chronicles the requirements and complications they faced trying to assemble a show this massive, including technical achievements that made it possible.

Interspersed throughout the technical details is footage of the concert itself, featuring performances by the likes of Fleetwood Mac, The Police, Talking Heads, The Ramones, The B-52's, Tom Petty, The Cars and Santana. The concert footage is the best part of the film, so it's a shame we get only one song each by the biggest artists (the rest are featured in short clips). But since quality footage of the 1982 US Festival is hard to come by these days - legally anyway - I guess this'll have to do.

Some of the artists are interviewed, all of whom fondly reflect on how big the whole thing was (for most, it would be the biggest show of their careers). Speaking of fond recollections, we hear almost nothing negative about the entire event. Aside from a few brief comments on Bill Graham's clashes with the concert staff, no one has anything but gushing praise for Wozniak and his vision. Which is fine, I guess, but both Wozniak and the festival had their share of detractors. Hearing some contrary viewpoints would have made more compelling viewing.

As it is, though, The US Festival 1982: The Us Generation is a decent time capsule of an event few people seem to remember. A full blown concert film would have been preferable - perhaps with this documentary as a bonus feature - but we are reminded of how massive this undertaking really was.