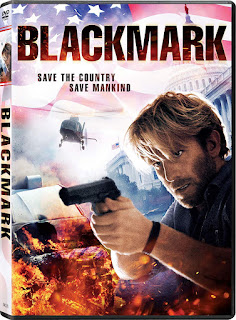 The official website indicates this film was originally titled Red Fish Blue Fish, which is a far more intriguing title than Blackmark. Slapped with generic box art suggesting a straight-to-DVD shootfest, the film is actually a speculative cold war thriller that takes place primarily in 1963 and ultimately offers an alternate theory about the Kennedy assassination.

Not to say there isn't any action. Much of it involves American spy Timothy Daniels (Kaiwi Lyman, looking more 1993 than 1963), who's ordered to hack into Russia's defense system and launch a nuclear warhead at his own country. He and Soviet military officer Alexi Popolovski (Corey MacIntosh) end up working together, shooting their way out of several confrontations in an effort to save Popolovski's family.

But Blackmark is primarily about its title character (Jeff Hatch), an ambitious military industrialist who appears to be trying to prevent a nuclear war while simultaneously eliminating his competition. He could be considered the story's de-facto villain simply because he's the most ruthless, but just about everybody around him appears to have sinister agendas as well. "Appears" is definitely the operative word here. Blackmark is phenomenally complicated, often a challenge to follow because it's seldom clear who's working for who, who wants war & who doesn't.

Writer/director A.J. Martinson definitely deserves kudos for ambition. If nothing else, we often forget we're watching a film with a relatively limited budget. Despite taking place on just a few small sets with a cast of unknowns, Blackmark thinks big, unfolding with the urgency and narrative scope of a large-scale thriller. However, the intricate story eventually becomes exhausting, not helped by an underwhelming and surprisingly simplistic resolution.

But as long as the viewer is ready to give it 100% of their attention - hit the pause button before hitting the bathroom, kids - Blackmark remains pretty watchable. It won't make anyone forget Fail-Safe, but its aspirations are admirable.