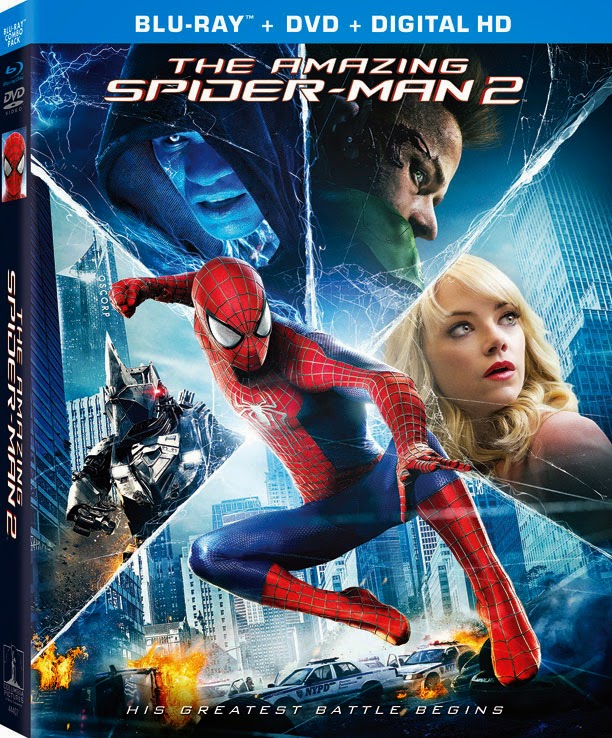 I’m still reeling over how quickly Marvel decided to risk rebooting this franchise, considering all three films in Sam Raimi’s original trilogy were relatively-recent blockbusters. On the other hand, even though Spider-Man 3 was mega-huge, I've never met anyone who actually liked it.

Yet the gamble paid-off. 2012’s The Amazing Spider-Man was surprisingly charming and fun. While far from Marvel Studios’ crowning achievement, it was pretty impressive for a film telling nearly the same origin story as Raimi’s version a scant decade earlier.

Like most inevitable superhero sequels, The Amazing Spider-Man 2 spends a great deal of time trying to top the first film by being bigger, longer & darker…more villains, more plot, more special effects, more spectacle and a more tortured Peter Parker (Andrew Garfield), at odds with himself due to his relationship with Gwen Stacy (Emma Stone) and the promise he made to her dying father. In fact, trailers initially made this sequel look guilty of committing the same mistakes as Spider-Man 3…beating the audience into submission with sheer quantity over quality.

But The Amazing Spider-Man 2, while definitely a half-hour too long, isn’t the exercise in cinematic overkill one might be led to believe. There are the usual scenes of CGI-driven action and spectacle, but they never become so overwhelming and hyper-edited that their logistic impossibility sucks us out of the movie.

Like the original film, a lot of attention is paid to the characters…perhaps too much at times; Peter and Gwen’s on-again-off-again dance eats up a lot of screen time and grows repetitive after awhile. Even though their tumultuous relationship is vital to the emotional impact of the climax, I was suitably surprised, yet curiously unmoved. For me, Peter’s relationship with Aunt May (Sally Field, outstanding in her precious few scenes) is far more interesting and poignant.

On the other hand, this film does a tremendous job establishing its two main villains, Electro and Green Goblin (Jamie Foxx and Dane DeHaan...the latter turns in the movie’s best performance). Like all great antagonists, they aren’t completely evil; only through tragic circumstances and misunderstandings regarding their friendship with Parker do they become villains. Throughout the movie, we always feel a small bit of empathy for them.

Finally, there’s the overall tone of the film, which is more somber than the first (especially the final act). I’ve got no objection to dark superhero films. Hell, I reveled in the grim & gritty reality of Nolan’s Batman trilogy. I don't read comics, so for all I know, the Spider-Man saga always followed a similarly dark path. But I was groomed on movies where the webbed one was always more of an amusing, wise-cracking and somewhat-immature teenager. While this film isn't as unnecessarily brooding as Man of Steel, not every comic book franchise needs to be built on a foundation of tragedy.

Still, The Amazing Spider-Man 2 is good for what it is, a solid sequel that’ll please fans of the first movie, but won’t likely exceed anyone’s expectations. And, in keeping tradition with other recent Marvel movies, there are a few stray plot threads left unresolved in order to pave the way for a third film.