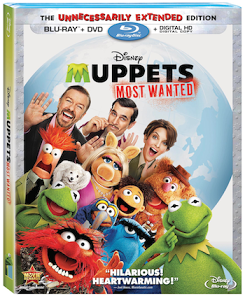 It is comforting to know, in this age of computer animation, giant robots, superheroes and two-hour toy commercials, there’s still a place for the Muppets, even though they haven’t changed one whit in 40 years (and who’d want them to?). A new Muppet movie is like a visit from an old friend.

Muppets Most Wanted offers an abundance of everything which endeared us to these characters in the first place…self-aware humor, eye-rolling puns, breaking the fourth wall, gratuitous cameos, silly sight gags and the occasional sentimental moment. As usual, it’s put together so well we forget we’re essentially watching a puppet show; the Muppets are every bit as real as their human co-stars.

The only real difference is Muppets Most Wanted is the first direct sequel in the franchise, picking up immediately after the end of The Muppets (their welcome return to the big screen after a long absence). After their successful comeback show, Kermit and the gang ponder their next move. Following an amusing musical number where the Muppets sing of the inferiority of sequels, Dominic Badguy (Ricky Gervais) offers to be their agent and suggests taking the show on a world tour. But that’s just a ruse, because he’s in cahoots with Constantine, a criminal mastermind who just escaped from a Siberian Gulag (and looks almost exactly like Kermit the Frog). Their plan is to get rid of Kermit, replace him with Constantine, steal various valuables from museums around Europe and ultimately frame the Muppet gang for the crimes.

But like every other Muppet film, the plot only exists because most movies need one. What truly matters are the gags, songs and set-pieces which allow each character a moment or two in the spotlight.

Just like the opening number foretells, Muppets Most Wanted does not reach the heights of its predecessor (much like The Great Muppet Caper was a fun-but-inferior follow-up to The Muppet Movie). While the songs are amusing, the musical numbers are a bit more intrusive this time, and none are as memorable as “Man or Muppet” (which won an Oscar). On the other hand, you haven’t lived until you’ve witnessed Hollywood tough guys Ray Liotta and Danny Trejo breaking out into song as part of a Gulag chorus line.

Speaking of which, the usual celebrity cameos come at you fast and furious, and you’ll probably need to see the movie twice just to catch them all (Tom Hiddleston and Usher - playing an usher - are the most amusing). As for the primary human cast, Gervais and Tina Fey come-off best. Both interact with their puppet co-stars as though they are fellow actors. Ty Burrell, however, kind-of overdoes it as an Interpol agent working with Sam the Eagle.

While not quite as fresh and clever as The Muppets, this film is still a lot of fun (unless you’re a cold-hearted cynic). Hopefully, its relatively disappointing box office performance won't dissuade Disney from bringing them back for more adventures, because I really want these old friends to stick around.