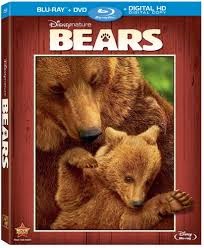 They used to make a ton of them - True-Life Adventures - and I grew up on that stuff. Most of them were theatrical short subjects which occasionally showed up on ABC‘s Wonderful World of Disney on Sunday nights. They were cheerful - sometimes humorous -  looks at various critters and their environments, accompanied by often-cornball narration by Winston Hibler. These movies were always fun, but not necessarily documentaries in the truest sense of the word. As we youngsters grew older and wiser, it was obvious some scenes in those films were staged and scripted for the sake of entertainment.

The DisneyNature films are much bigger and far more ambitious, definitely made to be seen on the big screen. Like a few others in the series, Bears utilizes a narrative to create a plot of-sorts and turns its subjects into characters with unique personalities. In this case, it’s a year in the lives of Sky and her two cubs, Amber & Scout. Beginning with their emergence from their winter den, we follow them as they migrate to the sea and back in search of food (especially salmon, glorious salmon). Along the way, this little family encounters such dangers as wolves and other bears, who are also given names and ultimately-endearing personalities (except maybe for Chinook, a brown bear who’s kind of a douche).

This is all narrated by John C. Reilly, whose voice you’ll recognize almost immediately. He offers the occasional fact and voices what various bears might be thinking. The attempts at humor are occasional eye-rolling, but for the most part, Reilly does an effective job telling this story.

While there are some moments of script-created drama and suspense, the tone remains light and playful. If you’re hoping to see nature’s vicious cycle of life caught on film, you’re better off tuning in to NatGeo. The primary goal of Bears is to provide family entertainment, which it does very well. Sky, Amber and Scout make great (and adorable) protagonists, while the biggest of the bears, Magnus, is truly intimidating. As for Tikaani, the hungry wolf…he’s as amusingly hapless as Wile E. Coyote.

What ultimately separates this from all those old True-Life Adventure films is it’s obvious none of these scenes were created or staged for the sake of the story. You’ll often find yourself wondering just how the hell the film crew managed to get some of these shots (which is explained in detail in some accompanying featurettes on this disc; you’ll develop a deep appreciation for the time and effort it took to make this film).

Like the rest of the DisneyNature films, Bears is visually spectacular and beautiful to look at. Even if you don’t care for the attempts to turn it into a story, the visuals alone make Bears worth owning, especially if you happen to own a big screen TV. Your puny little iPad just won’t do.