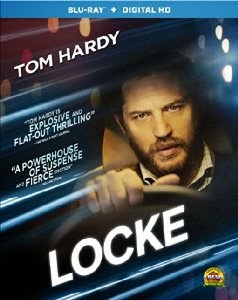 So I was reviewing Locke last night, and it was near the end when my oldest daughter came in, sat down and asked me what I thought. I replied that it was pretty interesting. When I explained the story, she replied “That sounds boring.”

And indeed, there’s no way you can describe Locke without making it sound pretentious, arty and dull. It’s definitely not an action picture, though the Blu-Ray box art, synopsis and gushing critical soundbites might lead one to believe so.

But Locke is a unique, somewhat oppressive, character drama, featuring Tom Hardy in the title role and the film’s sole onscreen actor. The ‘action,’ so to speak, takes place entirely in his car as he drives to London to be by the side of Bethan, with whom he had a one-night-stand and who's about to give birth to his child. But things aren’t quite that simple...Locke is a construction foreman who, because of a questionable decision to do right by Bethan, takes off on the eve of the biggest construction project of his career, leaving it to a hapless (and drunk) underling to oversee the job (where millions of dollars are at stake). He also calls his wife, Katrina, during the trip to confess his infidelity and where he’s heading.

Presented almost in real time, through back-and-forth phone calls between Locke and everyone he knows both personally and professionally, we watch him desperately try to keep things in order as his life spirals wildly out of control during this drive. Part of what compels him is a resentment he holds for his father, who abandoned him years earlier under similar circumstances. Determined not to make the same moral mistakes, Locke risks everything he’s spent his life trying to achieve.

Single-character stories are difficult to pull-off effectively, especially in movies, where everything rides on one actor’s performance. Throwing that actor into the confines of a single setting provides an even greater challenge…how do you make a feature-length movie like this without having it come-across as a pretentious stunt? Part of the credit must go to writer/director Steven Knight and cinematographer Haris Zambarloukos, who manage dozens of creative ways to move us in and out of Locke’s car for increased dramatic effect. The lighting, the foreboding nighttime setting and the artful use of mirrors and windshields are considerable elements which enhance to the mood and create a surprising amount of suspense.

Ultimately, there's a great deal more going on within the confines of that car (said and unsaid) than we're initially led to believe, mostly thanks to Hardy, who once-again embodies a deceptively-fascinating character. Tom Hardy is an amazing actor, a true chameleon who physically disappears into his roles unlike any modern A-list actor you can name. Just like Warrior, Lawless and The Dark Knight Rises, we never feel like we’re watching Tom Hardy…we’re watching a character - and actor - we’ve never seen before.

However, Locke isn’t what you'd call a fun film. It’s dark and oppressive right from the get-go (which will alienate some viewers), and the ambiguity of the climax may have one questioning whether or not it actually ends happily; I guess that largely depends on the one’s personal values regarding the plot turns. In any case, Locke is a unique film which will undoubtedly spark love-it-or-loathe-it debates. I seriously doubt there’d be much middle ground, which automatically makes it well-worth checking-out.