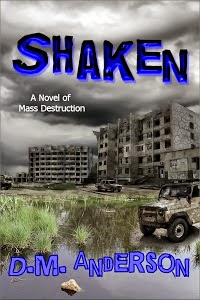 (I love a good disaster story (on the big screen or otherwise), so I wrote one of my own, inspired by the genre I grew up with. It's gotten some good reviews, too.)
Natalie, a self-centered girl, is dragged away by her family at the worst possible time. Damien, a juvenile delinquent condemned as an accessory to murder. Connor, an angry young man unable to get over the death of his father.
Three teenagers from different backgrounds, each suffering pain and loss, must now find strength, responsibility, and heroism they didn’t know they possessed when the worst disaster in American history, a 9.7 earthquake devastates the Pacific Northwest. Their struggle for survival will not only test their resolve; it will affect the lives of everyone around them. Can they let go of their own personal issues and look beyond themselves before a massive tsunami destroys them all?
A review of Shaken by Colleen McKie from Lavender Lines:
I LOVE disasters movies. Which really makes no sense, because I’m a pretty stressed person and if a disaster ever hit I’d probably curl up in bed with my stuffed frog and a shit-ton of Reese’s Peanut Butter Cups. But I’ll watch disaster movies until the cows come home. I love watching how people deal with horrific situations and how they come out on the other end, changed. For me Shaken was like a disaster movie in a book. It had all the elements that I love and then some.
I read Shaken in two sittings. It probably would have been devoured in one, except that I read it a few days before Christmas so I was a bit distracted with wrapping gifts and such. It was an intense read, what with the earthquake and all. But I just couldn’t put it down. I needed to know what happened to these three teens and others that were in the book.
The way Anderson described the earthquake, and what happens after, made me feel like I was watching it happen. I could feel the tension, the hope, the desperation as characters struggled to deal with the aftermath and trying to survive. My heart was pounding during certain scenes, breaking during others.
Now, I don’t want you to think that this was just an action book, because that’s so not the case. There was some nice character development in Shaken. I enjoyed watching the teens grow and realize who they really are. I felt for these characters and I cared what happened to them.
Shaken was just a great all around read. For fans of disaster movies, disaster books and just great YA books, I recommend Shaken.
Shaken is now available in paperback or Kindle at Amazon.
Posted by D.M. Anderson at 10:51 AM