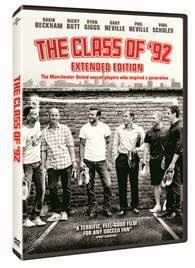 It obviously helps if you’re a true soccer fan, not one who pretends to enjoy the World Cup every four years, yet quits watching after USA is eliminated (which is usually pretty early). And no, forcing your son or daughter to play doesn’t suddenly make you a soccer fan either…it makes you a fan of your kid.

But even if you aren’t necessarily a die-hard, you still probably know who Manchester United are, the New York Yankees/LA Lakers/Dallas Cowboys of English Football, and one of the biggest sports franchises in the world. At the very least, surely you’re familiar with David Beckham (you know, the guy who married Posh Spice).

Like all beloved sports franchises, Manchester United had more than their fair share of glory years, eras where they were an unstoppable dynasty. The Class of ‘92 is a lovingly-filmed documentary consisting primarily of the six most notable players of the time, who tell stories and offer anecdotes about what it meant to be part of that historic team. Each member is individually profiled, their contributions to the team gushed over by teammates and coaches. We also get a look at the United’s impact on British culture during that time, when these players were not only world class athletes, but glitzy celebrities hobnobbing with rock stars, actors and political figures. I don’t know whether or not these guys got along with each other this well in real life, but they come across as being tighter than brothers.

Now that I think about it, I might need to amend what I said before about being a soccer fan. What really helps is if you’re a Manchester United fanatic, since the film actually has relatively little sports footage. Sure, we get snippets here and there, but The Class of ’92 is mostly about the people who made up the team, not the game itself.

As of this writing, The Class of ‘92 is only available in the U.S. at Wal-Mart stores…an odd choice, considering I was always under the misguided impression that those who regularly shop at Wal-Mart mostly enjoy sports which include ammunition. So, if the United is your team, now you know where to go, and this disc will be worth the trip.

(Add a kitten if you love the United, take one away if you only care about soccer during the World Cup)